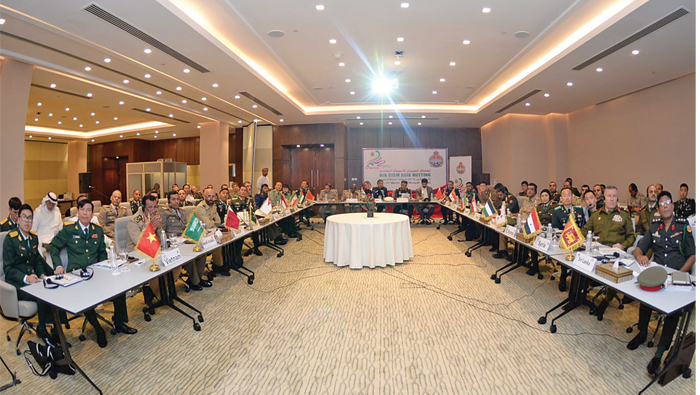 Muscat: The Command of the Sultan’s Armed Forces (COSAF), represented by the Directorate of Military Sports, hosted the sixth meeting of the International Military Sports Council of the Asia Region (CISM) in Muscat yesterday.
The meeting began with hoisting the flag of the Sultanate and CISM. Then, the Director of Military Sports at COSAF delivered a speech welcoming the delegations participating in the meeting, wishing them success.
Colonel Herve Piccirillo, CISM President delivered a speech in which he thanked the Sultanate for hosting the meeting. He reviewed a number of topics on the agenda of the meeting.
He also highlighted the achievements of CISM during the past years and highlighted the activities organized by the Council.
The activities of the first day continued.
The head of the Iranian delegation reviewed the report on the first World Military Shooting Championship (bow and arrow) in 2018.
The head of the Vietnamese delegation reviewed a report on CISM 74th General Assembly meeting.
The head of the Chinese delegation also reviewed the report on the Seventh Military Games, after which a number of performances were screened.
The meeting also discussed the qualifying mechanism for football for men and women for the seventh military games, which will be held in China during the second half of 2019, as well as the calendar of activities and sports events for the year 2020.
At the end of the first day of the meeting, a seminar was held for the members.