His Majesty’s thought advocates values of love in the world: Alawi 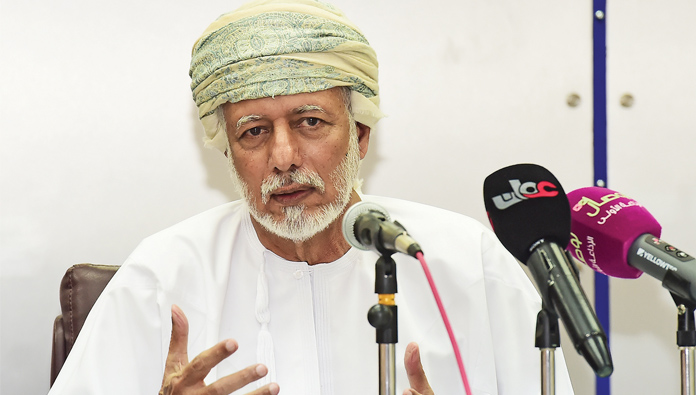 Muscat: The thought of His Majesty Sultan Qaboos bin Said is based on the principle of making more friends and disseminating values of love in the world, said Yousuf bin Alawi bin Abdullah, Minister Responsible for Foreign Affairs during a lecture held at the Cultural Club.
He added that the Sultanate is following a clear path that “neither harm anyone” nor entail any danger, which is based on fundamentals of honesty and transparency and not involve in hidden agendas, and this path has become clear to others and has gained international convictions. He added that His Majesty the Sultan has foreseen the places where conflicts can occur.
The Minister Responsible for Foreign Affairs said that the issues of the region concern all citizens, noting that the policy outlined by His Majesty on how to deal with ourselves and with others is based on firm foundation and principles that only change according to requirements of the changing world.
He pointed out that in the past five decades, crises and disputes emerged that led to wars in the Middle East between the Arab states, Israel and the West. Nevertheless, the Arab world has sought peace, stability, tranquillity and development “until the emergence of a new pattern of extremism and populism, which is now known as Da’esh,” that was defeated militarily, but should be eliminated intellectually.
He affirmed that the Sultanate is devoid of those who follow the thought of Da’esh, saying: “The Sultanate of Oman does not have any Daesh, and there are no people to say that there is one Daeshi in Oman”.
He said that the Sultanate considered the Palestinian cause as “a red line” and “does not trade on the Palestinian cause”. He added that the establishment of the Palestinian independence state is a strategic necessity not only for the Palestinians, but also for the entire region.
On the visit of the Palestinian President Mahmoud Abbas and the Israeli Prime Minister to the Sultanate, he said that the visit was made with the knowledge of both the Palestinian and Israeli sides as they requested the Sultanate to facilitate their dialogue because they believe that the Sultanate has no hidden targets.
He added that the Sultanate, through these visits, did not prompt anyone to say what he did not want to say, “but we heard from both parties on the possibility of agreeing on matters that were difficult in the past, including the issue of the occupied Jerusalem, the Israeli settlements and security”. He further said that the United States (US) cannot implement the “Deal of Century” unless there is an independent Palestinian state with sovereignty. He considered that the Palestinian party is the strongest and has the ability to accept or reject the deal, in accordance with the national interests.
He concluded by saying that a number of issues in the region were “unresolved” and would take time to solve them, such as terrorism issues in all its forms, such as intellectual terrorism, armed terrorism and economic terrorism, which are linked to specific related issues. He stressed that such issues would take other forms unless we find best solution for them.