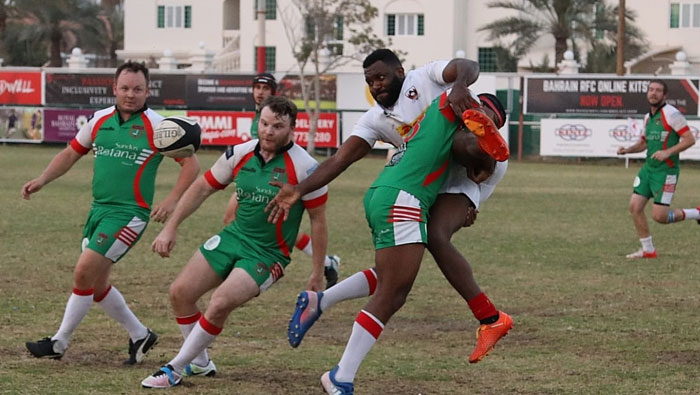 Manama: Bahrain Select completed their double over a resilient Muscat Rugby team by beating them 34-5 in Manama and clinched the 2018/19 Gulf Conference Championship last Friday.

Muscat were once again forced to make over 11 changes to the travelling 23 from the squad who defeated the Dubai Eagles in Dubai two weeks ago. In came Julian Mullineux and Stoney Steenkamp for their last ever appearances for the club, Karl Rasmussen returned to the bench with Yas Al Delamie and Conor Quaid joining the pack.

Club stalwart Phil Braban was moved to the 12 position due to the availability of over 10 different squad players. Bahrain sprung from the blocks and due to a miscommunication at a defensive lineout, the Bahrain team capitalised on a Muscat error to get the first score of the game, while the second try came from a blocked down grubber kick by Dan Worth.

Bahrain counter attacked and after a neat set of passes scored practically unopposed in the far corner. With the conversion being successful Bahrain were already building up a solid lead, Muscat’s discipline let them down albeit only once when they gave away a very kickable penalty in scoring range. Bahrain duly obliged and added another three points. Despite the score line, which was to be 27-0 at half time the Muscat boys had played some good attacking rugby, perhaps too much in their own half.

The boot wasn’t used enough to gain territory and potentially put the young Bahrain wingers under some pressure. Muscat regrouped at half time and made the necessary changes due to injuries to Kirk Mc Millan and Julian Mullineux. Head coach Luke O’Mahony made it clear that the team had performed well in the first half but needed to put the game to Bahrain.

Leave with your head held high was the call and the Green Machine duly responded, between the monster tackles being put in by Phil Braban and Dillan Karelse, the yardage being made by Cobus Stander, Spencer Sutton and Rahbeen Ahmad, the Muscat lineout was brilliant with Joseph Thompson and Tiaan Nolan performing incredibly.

Muscat started to take control and steady the scrums also giving Dan Worth more time at the number 10 position, he duly took his chance and with his big hips he was able to bamboozle the Bahrain defence, find a gap and get over for Muscat’s first and only try of the game.

As the game petered out and both sides became tired due to the relentless contact in the middle of the park, gaps began to appear: with Muscat’s bench emptied, Bahrain snuck in a for a final try in the corner. The game finished 34-5 to the home side. Muscat, despite also losing the second half weren’t dejected and took great comfort from the battling display in the second half. Bahrain were crowned champions and Muscat must now go away to the fortress that is Doha to try and salvage something from this season. A point will secure second place for Muscat.

“I thought we really worked hard in the second half and showed that we can play proper structured rugby against the better teams,” said coach Luke O’Mahony to Times of Oman. “Our standard is improving each game but it’s just disappointing we can’t get consistency in selection. We will open up a bit more against Doha and try and play a more open game, considering we have nothing to lose.”