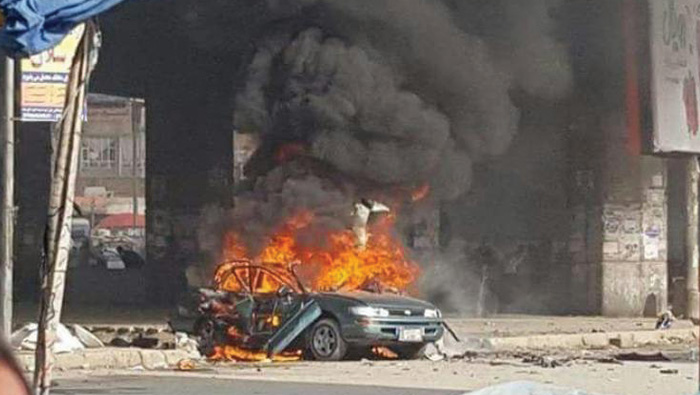 Kabul: A huge explosion hit Koti Sangi District, west of the capital city Kabul on Saturday.
Police has blocked the accident area and does not permit people to come near the accident scene.
Local police declared that a car bomb blasted unexpectedly in Koti Sangi district of western Kabul, claiming 2 lives, including the driver.
Basir Mujahid, the spokesman of Kabul police department confirmed that the car had a magnetic bomb attached when it blasted prematurely.
He added that investigators have arrived at the scene and launched probes into the explosion.
The vehicle was a private car, not an army vehicle, according to Mujahid. Firefighters have been dispatched to accident site and are extinguishing the fire.
Earlier, the terrorist attacks on the ceremonies commemorating the anniversary of martyrdom of Abdolali Mazari, leader and founder of Afghan Vahdat Islami Party, killed 11 people and injured 95 more.
Executive Head of Afghanistan government, former vice president Mohammad Yunus Qanuni and Second Deputy Chief Executive Mohammad Mohaqiq were addressing the meeting when the explosions occurred.