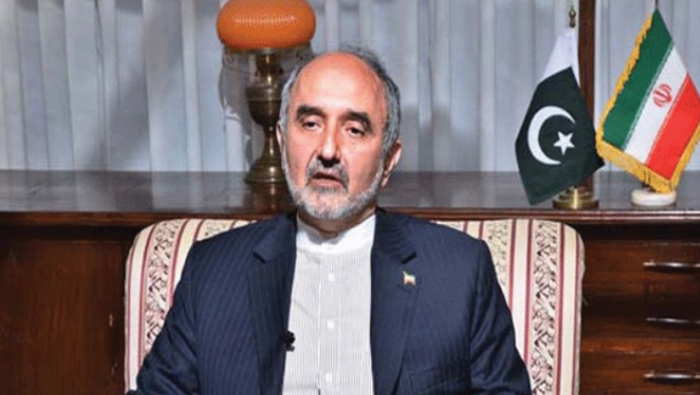 Islamabad: Ambassador of Iran to Pakistan Mehdi Honardoost has called for stronger counter-terrorism cooperation between Iran and Pakistan.
The ambassador was speaking at a seminar on ‘Pak-Iran Relations: Current Scenario and Future Prospects’ at Islamabad Policy Institute (IPI).
“Iran and Pakistan are victims of terrorism. This concern should be at the top of the agenda of negotiations and consultations between the relevant authorities,” he said.
The envoy made this comment in the context of last month’s terrorist attack in Sistan and Baluchestan province, the abduction of border guards in October 2018, and similar terrorism incidents in the past.
Honardoost said the hand of a third party, which supports terrorism, extremism and is against closer Iran-Pakistan ties, is evident in these incidents.
He said he is confident that Pakistan and Iran would together foil the sinister designs of “the third party” the one that is not easy with brotherly and friendly ties between Iran and Pakistan and is also involved with patronizing “extremism and terrorism”.
Speaking about the recent conversation between Iranian President Hassan Rouhani and Prime Minister Imran Khan the ambassador said, the two leaders had reaffirmed their pledge to cooperate for border security.
He said Iran is having good communication with Pakistan on all issues. The two countries, he said, are exploring new areas of cooperation.
About some Arab countries’ planned investment in Gwadar, the envoy said, Tehran is not concerned about “constructive engagement” of any country with Pakistan.
“We expect solidarity, cooperation, and interaction between Pakistan and other Muslim countries to improve,” he said. He, however, emphasized that it is Pakistan’s obligation as a responsible country that “the cooperation is not misused against any other country”.
The ambassador spoke about trade and economic cooperation between Iran and Pakistan.
Emphasizing the importance of completion of Iran-Pakistan gas pipeline project, he said it could “provide the foundation for revival of Pakistan’s economy” by strengthening Pakistan’s energy security and ending power shortages.
“We are waiting for Pakistan to move on the project,” he said.
He reiterated that Pakistan’s Gwadar and Iran’s Chabahar ports are not rival ports, and instead have a sisterhood relationship.
The ambassador said a passenger and goods ferry service between Karachi and Chabahar is being negotiated.
“The inauguration of ferry service and initiation of supply of electricity to Gwadar from Iran would be the best way to celebrate the sisterhood of two ports,” he said. – IRNA