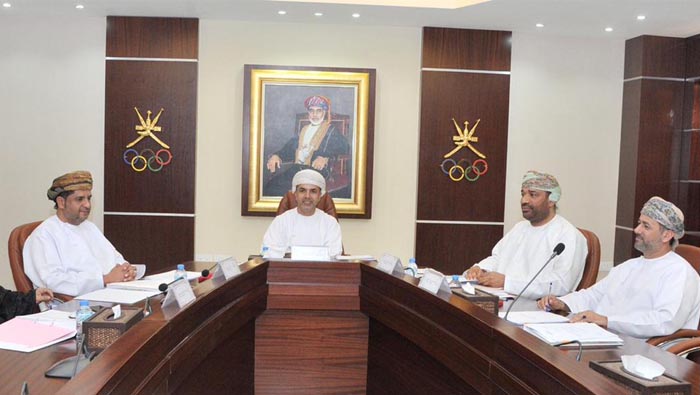 Muscat: In its first meeting this year, the Board of Directors of Oman Olympic Committee discussed about preparations to host GCC Olympic committee presidents’ meeting in Muscat.
The Board of Directors of Oman Olympic Committee (OOC) held its first meeting on Thursday at OOC premises under the chairmanship of Sheikh Saif bin Hilal Al Hosni, acting OOC chairman, in the presence of Taha bin Sulaiman Al Kishry, OOC secretary general and Sheikh Sheikh Badr bin Ali Al Rawas, Mohsin bin Hamad Al Masroori and Saadah bint Salim Al Ismailiya, OOC Board Members.
Acting OOC chairman expressed his pleasure over the past achievements and commended the efforts made by OOC’s General Secretariat and the executive management and supporting committees in 2018 and the cooperation among the OOC and sports associations and the Ministry of Sports Affairs.
He pointed out that several programmes and events were carried out, foremost being the inauguration of Oman Olympic Academy at the end of December 2018, the hosting of the Regional GCC and Yemen Anti-doping Regional Forum in cooperation with Oman Anti-Doping Committee and the organisation of the Fun Run Day in promotion of the 18th Asian Games, in the presence of the Organizing Committee members, Husain Al Musallam, Director General of Olympic Council of Asia (OCA).
The Board congratulated Saada Al Ismailiya for winning the Women and Sport for Asia Award 2019 in recognition of her efforts and contributions to promoting women’s sport in the Sultanate.
The record of the fifth board meeting in 2018 and the first meeting of the executive office held on January 7 were approved and decisions and recommendations
made at the meetings were reviewed.
The meeting reviewed the report submitted by the General Secretariat on the progress of work of supporting committees and their 2019 programmes and plans as well as the OOC’s 2019 – 2024 plan for continuing to develop technical standards of national teams, organise sports and Olympic activity and coordinate the activities
with the various spots associations.