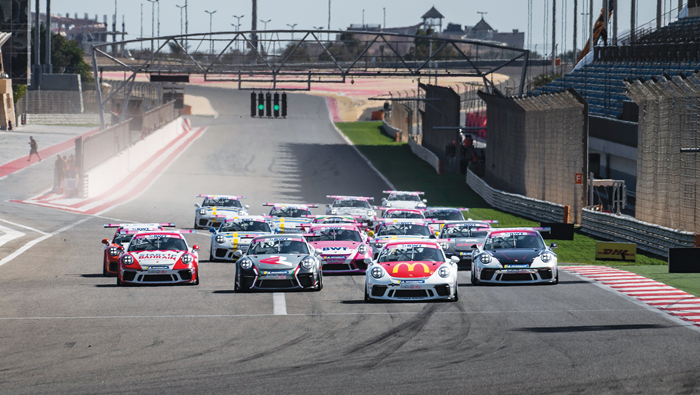 Bahran: Oman’s Al-Faisal Al-Zubair and Khalid Al-Wahaibi finished the first of three races in the Porsche BWT GT3 Cup Challenge Middle East at Sakhir in Bahrain in second and third places after Al-Wahaibi had qualified in pole position for the opener on Friday.
Both drivers are running under the Walter Lechner Racing banner and delivered impressive performances in the 14-lap race, despite the race win falling to Frenchman Jean-Baptiste Simmenauer by 3.774 seconds. Al-Zubair had arrived late in Bahrain to maintain his title challenge. He began the day with a 41-point advantage over Turkey’s Berkay Besler in the Drivers’ Championship and the runner-up spot enabled him to extend that to 49 points. Besler finished the race down in sixth place.
Al-Wahaibi began the day in fifth in the Drivers’ Championship, a mere four points behind American driver Michael de Quesada. Third place in the race enabled the youngster to move into contention for a top three spot at the end of the season. He trails third-placed Simmenauer by nine points.
Al-Zubair said: “I am happy to finish the race in P2 after missing the practice in Bahrain when my flight from London was cancelled. Simmenauer drove an amazing race and took a well-deserved victory. For me, I was just behind and maintained my position. It was a good amount of points for me.
“I am starting the second race in fourth position. I think it’s a decent position. We still have qualifying for the third race to come. My goal is just to keep getting as many points as possible.”
Al-Wahaibi added: “A podium in the championship here for me in race one and a first in the Porsche. It’s been a great weekend so far. I had pole in the first qualifying and an overall podium. I started the race in first, had a bad start and wheel spun so much.
“Simmenauer had a rocket of a start and moved ahead of me and Al-Faisal. From then on, it was about maintaining the gap with the front. I made too many mistakes on the first two laps and that enabled them to pull away. I got stuck in and did my own race to the end. Without those mistakes it would have been better, but that is what we have to work on now.”
Al-Wahaibi began the day in stunning fashion by claiming his second pole position of the campaign with a potent lap of 2min 02.338sec in first race qualifying, which was enough to pip Al-Zubair by 0.012 seconds. Bahrain’s Isa Al-Khalifa claimed third spot and series rivals, Simmenauer and Besler, rounded off the top five.
Besler claimed scant revenge in qualifying for the second of the races and the first on Saturday morning with a pole-winning time of 2min 02.123sec. Simmenauer followed the Turk home in second place and Saul Hack rounded off the top three. Al-Zubair found himself down in fourth place and Al-Wahaibi was seventh of the 16 entrants.
Al-Zubair said: “First qualifying was really good. Less than half a tenth behind pole was amazing. Second qualifying was not so great. I made too many mistakes but I am focused on tomorrow.”
Speaking about his qualifying, Al-Wahaibi said: “Qualifying one went really well. After testing on Thursday, we knew that pole was possible. I knew if I put my lap together and made no mistakes we could do it. It didn’t feel like an amazing lap but it worked out perfectly for the pole.
“In Q2, I had a good lap until a certain point and someone in front of me ruined my lap and we lost five-tenths as a result of it.”