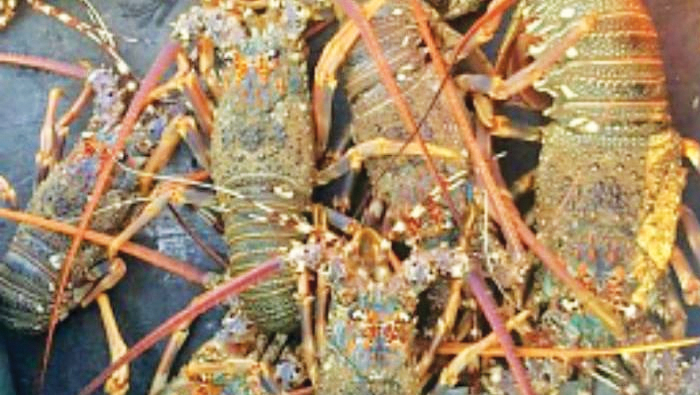 Ja’alan Bani Bu Hassan: The Omani seas are characterised by many demersal and pelagic fish, crustaceans and molluscs, which represent a great wealth and are characterised by their nutritional value and high prices in the local and international markets.
Some fishermen of the Sultanate, especially the fishermen of the Governorates of Dhofar, Al Wusta and South A’Sharqiyah, started fishing lobster whose fishing season begins on March 1 and ends on April 30 every year, which is (lobster) the most expensive marine wealth.
Salim bin Sultan Al Araimi, Director of Fish Development Department in Ja’alan Bani Bu Ali said that the fishermen of the wilaya fish lobster because these coastal villages are close to locations that are rich in lobster that usually live in the rocks and coral reefs, in addition to sand, mud and shallow depths.
He pointed out that the lobster, locally known as (Sharkha) fishing season is one of the most important seasons on which many fishermen depend and constitute a good economic return for the fishermen of these governorates.
He said that some wilayats in the Governorates of Dhofar, Al Wusta and South A’Sharqiyah bordering the Arabian Sea enjoy marine sites rich in lobster. He added that the Ministry of Agriculture and Fisheries has set fishing seasons according to the Sea Fishing Law in order to preserve the marine resources and to reproduce them in all kinds.
Salim Al Araimi said that preliminary indicators of fishery statistics show that the Sultanate’s production of lobster for 2018 was good quantities and excellent economic value for fishermen.
He pointed out that the fish statistics of the Ministry of Agriculture and Fisheries show that the Sultanate’s production of lobster during the year 2017 amounted to 339 tonnes compared to 485 tonnes during the 2016 season.
The Governorate of Dhofar ranked first in terms of the quantity of landed lobster for the 2017 season, with 136 tonnes, followed by the Governorate of Al Wusta with 116 tonnes, followed by the Governorate of South A’Sharqiyah with 74 tonnes.
Lobster has a good purchase value ranging from OMR4 to OMR5 per kg depending on the amount of landed lobsters and the supply and demand.
Lobster could be found in the areas of the Wilayat of Dhalkut in the Governorate of Dhofar on the Arabian Sea to the Niyabat of Ras Al Hadd in the Governorate of South A’Sharqiyah.
Lobster is consumed locally and internationally. It is exported to the Gulf countries, including the United Arab Emirates, Qatar,and Saudi Arabia and some Asian and European countries.
Al Araimi pointed out that fishermen must abide by the lobster fishing season and abide by the period of fishing ban during the period of fertilisation and breeding from early May until the end of February each year, as well as the prohibition of possession, processing and circulation of lobster during this period.
Lobster is a source of protein and is rich in potassium, zinc and iron. It also contains some amount of calcium and magnesium.