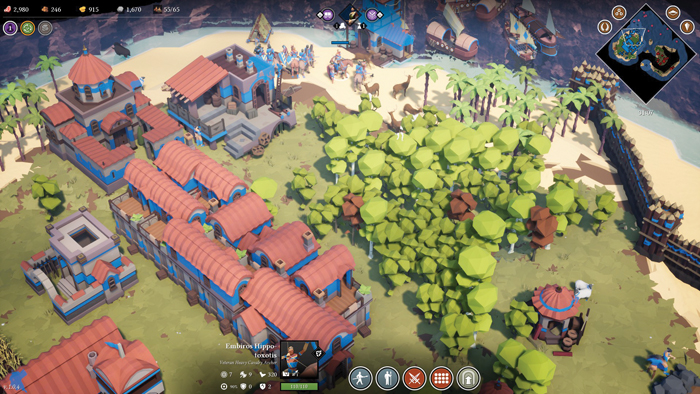 How do you measure the legacy of a good game? Is it how often people play it long after its release? Well yes, that’s one of the ways you could measure it. After all, what makes a good game playable long after its graphics can be easily matched by the computers that run them is its soul.
As odd as it may sound to some, the fact of the matter is that how well and deeply a game resonates not just with its target audience, but across all those across gaming is how one would measure its legacy. When gamers look back on a game such as Age of Empires, for example, they fondly recall it with immense respect.
Age of Empires didn’t just set the precedent for Real Time Strategy (RTS) games, they constantly made them better, and inspired others to do so, long after they first arrived, and that is the biggest impact a game can indeed have on its legacy. And now, 22 years after the first Age of Empires was first released, an Italian company has launched Empires Apart, a game which aims to be an homage to the legendary RTS series.
Empires Apart is now available to download and play for free on Computers, and the real-time strategy game is already out, despite being slated for a March 2019 release.
Designed by Italian developers DESTINYBit and published by Slitherine Software UK, the game features six civilisations, although only the Byzantine civilisation is unlockable at the very start. The others – the French, Koreans, Arabs, Mongols and Aztecs – need to be unlocked as the game goes on, either by completing objectives in-game, or by buying add-ons to add to the free base game.
While the gameplay and concept has come from Age of Empires, the design for Empires Apart seems to have been inspired by Minecraft, another smash hit. The entire world of Empires Apart looks to have been sculpted from the world of Minecraft, and this, truth be told, adds something different to the experience of the game. This twist to the game does not take away from what made Age of Empires special, and adds to it in a very clever, non-intrusive way.
This Age of Empires-Minecraft hybrid styling works really well, especially when it comes to the game mechanics. The manner in which the 3D graphic-designed waves lap across the shore, for example, is a neat little addition to ensuring the game does have some lifelike qualities, yet reminds people that at the end, it is a videogame. Another nifty little addition is how workers change their tools on the basis of what they’re assigned.
Ask your villagers to gather food from bushes, for example, and they’ll grab a basket in which to put the berries. Task them to split open veins of rock and mine the ore within, and they’ll swap the baskets for pickaxes. The interface too has been given a sleek overhaul that like AoE, features an extensive tech tree.
While there are no ages per se, civilisations can use their resources to unlock four major technologies to drive their civilisation forward, in addition to the many others that the game provides. The overall spirit and intention to model a game on the brilliant success of Age of Empires is tangible, but make no mistake, Empires Apart is very much a game that stands on its own two feet.
It truly is a fun game, and one that you must play this weekend. – [email protected]

The Short and Skinny
Name: Empires Apart
Genre: Real Time Strategy
What it’s about: Inspired by the award-winning Age of Empires series, Empires Apart is the latest arrival in the RTS genre, and aims to help bring back what made Real Time Strategy great in the first place
Produced by: DESTINYbit and Slitherine Software
Platforms: Microsoft Windows
Where to buy: Steam Store, Empires Apart website
IGN Rating: 8/10