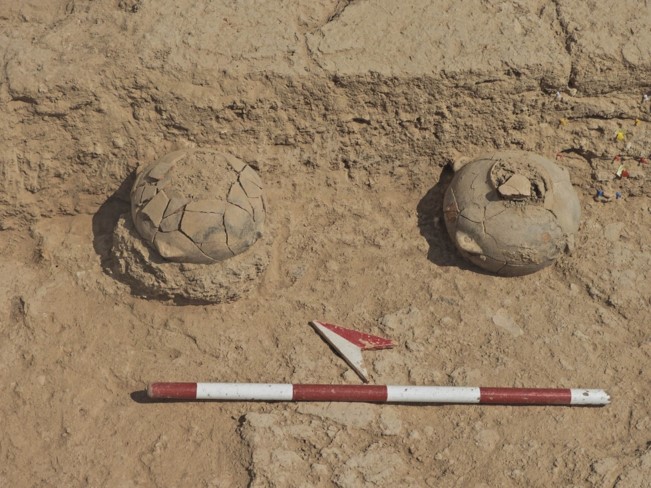 Muscat: Prof. Alessandra Avanzini, Head of the Italian mission of Pisa University in the Sultanate, announced new discoveries at the park of Salut Fort.
She said in a press conference yesterday that the recent archaeological excavations indicated that Salut site is a site of a city that is larger than previously thought. She added that evidence that were found confirmed originality of Salut as the heart of Majan Civilization in historic Oman.
Prof. Avanzini also emphasised the existence of cultural communication between Salut and the civilizations of the old world in the third millennium BC, where evidence of cultural interaction with ancient civilisations, such as the Indus Valley Civilisation and Mesopotamia Civilisation was found.
She said that after the discovery of the massive rock wall dating back to the Iron Age, which was part of a large settlement / the ancient city of Salut / by the end of the year 2015, and because of the excavation works, the features of the city became more visible.
She added that a number of buildings have been found, including ones with more than two rooms that separated by narrow streets, and rocky terraces were built around the entire plateau. She said that these are the most important discoveries made during the recent excavations.
She highlighted the existence of several elements such as, the extensive planning of the settlement, the regularity of the buildings, the internal network of corridors and streets, the rainwater drainage system, the existence of the fortified areas and the potential existence of specialised buildings. This remarkable system of planning shows hat Salut was a civilised centre.
Waleed bin Sultan Al Muzaini, Director of the Salut Archaeological Park said “Every day we discover new things that tell us about the history of Salut. What was discovered recently was very exciting as it was thought that the Salut city dates back to the Iron Age, but the recent findings and through the radioactive carbon sample (C14) showed evidence of the ancient history of the Salut City. It dates back to the first half of the second millennium BC; the Middle Bronze Age”.
Al Muzaini also pointed out that the new excavations also showed that settlement in Salut did not end in the first century AD, as it was thought, but extended to later eras.
Al Muzaini also explained that the Office of the Advisor to His Majesty the Sultan for Cultural Affairs is currently working on the development of this site to be a fully-fledged archaeological park to turn it into tourist attraction for Omani and foreign visitors.
He added that works have started on planting 300-date palms of different Omani types on a traditional farm and there is a study to showcase the discoveries at the park.