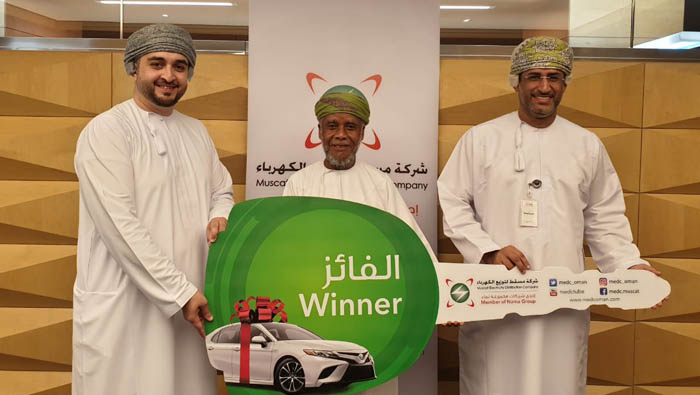 Muscat: Muscat Electricity Distribution Company (MEDC), a member of the Nama Group, conducted the raffle draw of Pay on Time competition prize at its head office in the Airport Heights. The prize was an automobile with partial electricity engine (hybrid).
The prize was a part of the pay on time campaign that has been launched by during the second half of 2018. The draw was conducted through electronic application in the presence of the representative of the Ministry of Commerce and Industry and number of the company’s executives.
The campaign aimed to encourage customers to pay electricity bills on time and avoid accumulating dues. Also, it was structured to motivate them to update their accounts data and maintain updated database which will enable the company to communicate with them easily and serve them better.
In recognition of the need to preserve the environment and contribute to reducing emissions, the award was an eco-friendly car with advanced safety technologies and a partially powered engine plus fuel to reduce fuel consumption and exhaust emissions.
It is worthy to mention that company offers multiple payments channels for the customers such as collection centers, direct bank transfer ,company mobile application (My account), mobile applications for local banks and Point of Sales (POS) machines spread throughout the Sultanate.