Oman stand at Vilnius book fair a hit with visitors 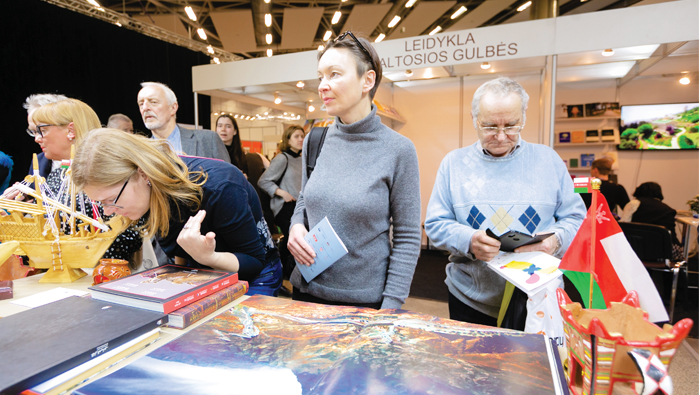 Vilnius: Visited by hundreds of people of all ages, from schoolchildren to seniors, the stand of the Sultanate was by far the most popular spot among all the non-Lithuanian participants at the International Vilnius Book Fair which took place from February 21 to 24 in the Baltic state’s capital city.

This year, the Honorary Consulate of the Sultanate of Oman in Lithuania, in cooperation with the Ministry of Information of the Sultanate, presented the country to the guests at the fair through first-hand accounts of two travellers fascinated by what they had seen in Oman.

Mariusz Oszustowicz, a Polish-Lithuanian photographer, arranged a show inside the Oman stand on Thursday and Friday for dozens of visitors. He presented a collection of his photographs from Oman – beautiful landscapes, portraits and cityscapes – followed by traditional Omani music. He also organised a quiz about Oman, the five winners of which received frankincense burners as awards at the hands of Boleta Senkienė, the Honorary Consul of the Sultanate of Oman in Lithuania.

Speaking about his travels, Oszustowicz said he had spent two months crisscrossing through Oman, mostly hitchhiking, which is his preferred way of travelling because he loves meeting locals and talking to them about different things.

“And hitchhiking is so good in Oman where the people are so friendly and relaxed. After picking you up on the roadside, locals would sometimes spend the entire day showing you places you would never see as an average tourist. Once, I was even invited to a wedding somewhere in the countryside,” he said.

According to Oszustowicz, he travelled during the winter to avoid the searing summer heat and mostly spent his nights in a tent, which he carried with him. He does not speak much Arabic and not everyone speaks English in Oman, but even this posed no major problems for him.

“If you smile, you will communicate somehow. Apart from that, hitchhiking there gives you a chance to try some of the most luxurious four-wheel-drives,” he added.

This year’s other special guest at the Oman stand at the Vilnius Book Fair was EglėLikaitė, a Vilnius-based travel guide who has been specialising in Oman and other Gulf countries for the past several years. She first visited Oman five years ago and, as she now confesses, fell in love with the country and its people instantly.

She met a large group of visitors at the fair on Saturday to tell them about Oman and answer numerous questions related to many aspects of life in the country, from the weather and security to prices and the economy.

For the past five years, she has been guiding groups from Lithuania coming to Oman and, sometimes, other Gulf countries. Depending on their interests and trip schedule, she takes them to various spots in Oman in an attempt to reveal the diversity and beauty of its nature.

“I consider myself a well-travelled person and yet some things in Oman are still astounding and unique, such as the Empty Quarter, the vast desert where I was struck by the solemn grandeur of the landscapes,” she said. “Another great impression after the first trip was the locals – so welcoming and friendly—you almost cannot believe you are a stranger here.”

Senkienė said the new format of communication – through the two eyewitness-storytellers – proved successful.

“Local people appreciate the chance to listen to stories by people who were there and who speak their language. Eventually, the communication becomes quite lively and personal which, I am sure, is good when promoting a country,” she said.

It was the fourth time in five years that the Sultanate took part in the Vilnius Book Fair. Every time Oman presents itself with a bright and beautiful stand decorated with traditional ornaments and the scent of burning frankincense. Visitors are treated to Omani coffee, dates and halwa. Inside the stand, dozens of books offer insights into Oman’s culture, natural beauty and everyday life.

The Sultanate is the only Gulf country to open a representative office in the Baltic States. The Honorary Consul of the Sultanate was inaugurated at the end of 2014 in Vilnius. It promotes bilateral cooperation and acts as an intermediary between businesses, tourism organisations and a number of public and private institutions, from ministries to universities and hospitals.

For Lithuanians, just as for many other Europeans, Oman is one of the few remaining unspoiled tourism destinations offering a great diversity of natural beauty. From a business point of view, Oman may be seen as a gate to the larger Gulf market with 70 million consumers.