Haitham to perform in four languages at Pakistan Day event 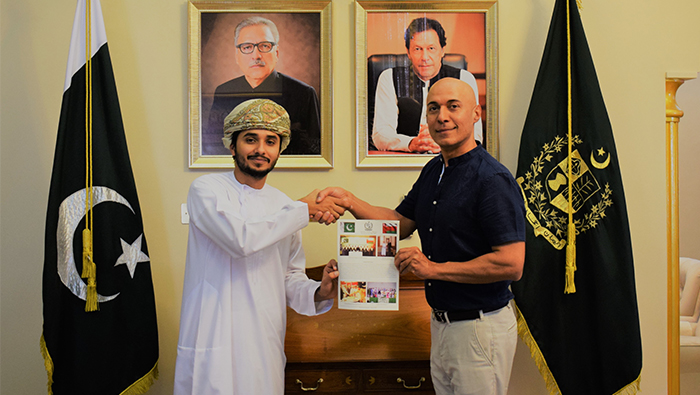 Muscat: Oman’s signing sensation Haitham Mohammed Rafi Al Balushi will be performing in four regional languages of Pakistan at the reception to mark ‘Pakistan Day’.
According to officials from the Embassy of Pakistan, Ali Javed, Ambassador of Pakistan to Oman extended an invitation to Al Balushi which was accepted.
Recently, Javed welcomed the internationally renowned, 25 years old singer, artist, and composer to his office who is an eminent representative of Oman-Pakistan Heritage.
Wishing good luck to Al Balushi for the ongoing ‘The Voice Ukraine’ singing competition, where he won over the audiences with his diverse singing skills, the Pakistan ambassador thanked Haris Ali and Yasin Bhatti – two prominent Pakistanis based in Oman for partnering with Al Balushi.
Both sponsors had previously teamed up to support ‘#Pakistan Awaits’ initiative in 2018 which included a Bahraini and an Omani girl along with two Omani and one Pakistani boy on a journey to North of Pakistan.