This castle in Manah is an example of Oman's traditional architecture 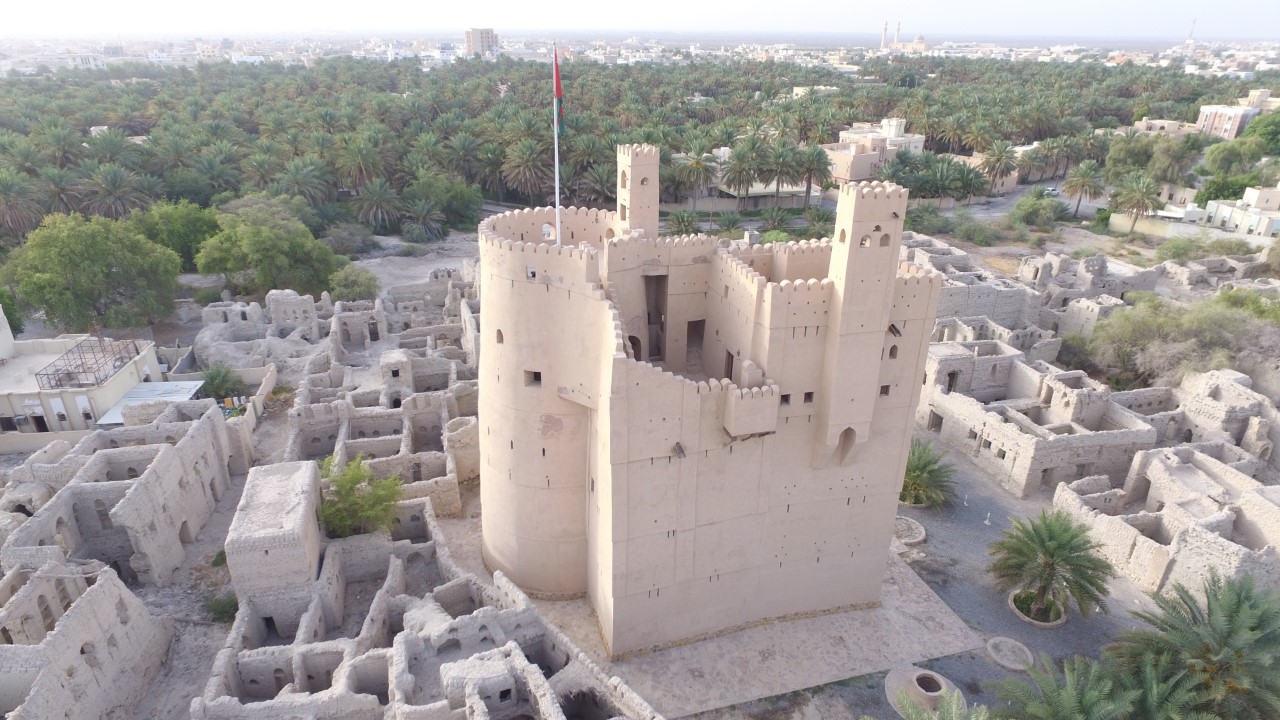 Manah: ‘Al Faiqain’ Castle in the Wilayat of Manah in the Governorate of A’Dakhiliyah, with its high towers standing in the middle of ‘Al Faiqain’ village, is considered one of the most important historical monuments in the wilaya.
It reflects the depth of the traditional Omani architecture in the construction of the defensive fortifications.
The castle is surrounded by old houses and oasis of date-palm trees from all sides, casting its shadow on the place. The castle has maintained its construction formations and details for more than 400 years until it was completely restored by the Ministry of Heritage and Culture. It was officially opened during the Heritage Year on June 24th 1994.
Khalfan bin Salim Al Busaidi, researcher in Omani history said “The inscriptions found in the upper part of the castle indicate the date of its construction, which dates back to 1027 AH, corresponding to 1617 AD. It was built by a group of skilled and experienced engineers from the Wilayat of Manah. Some Imams then had a role in protecting ‘Al Faiqain’ Castle as found in some manuscripts dating back to 1333 AH, including a manuscript of Imam Salim bin Rashid Al Kharousi.
He said that ‘Al Faiqain’ Castle is known for its defensive fortifications, the strength of its construction and its ancient architecture. He added that the door remained unknown to all and can only be accessed by a rope hanging from a hole on the second floor. “It was difficult for visitors to climb to the castle until a main gate was allocated to the castle on the south side during the restoration process”, he said.
The ingenuity of Omani architecture lies in the divisions of the four-storey Castle. It is divided into northern and southern parts. The northern part is dedicated to the military defence of the castle and the surrounding ancient houses while the southern part is dedicated to housing, in addition to storing dates, cereals and other foodstuffs. The fourth floor contains a library full of shelves used for religious and scientific books, manuscripts, documents and other archives.
In 1991, the Ministry of Heritage and Culture restored the entire castle as it is part of the Omani history. The damaged and affected areas as a result of the weather conditions over time were restored and were opened before visitors in 1994. In 2008, the castle was restored again by renovating the towers, corridors, arches, and laying the surface stones on the first floor of the castle and the opening of a new door connecting the northern part and the southern part in the third floor to facilitate the task of visitors, as well as the placement of a belt surrounding the castle from all directions for aesthetic purposes. Plaster was used in maintaining the whole castle.
The castle welcomes visitors and tourists from inside and outside the Sultanate to view this historical facility, its details and secrets in the traditional military architecture.