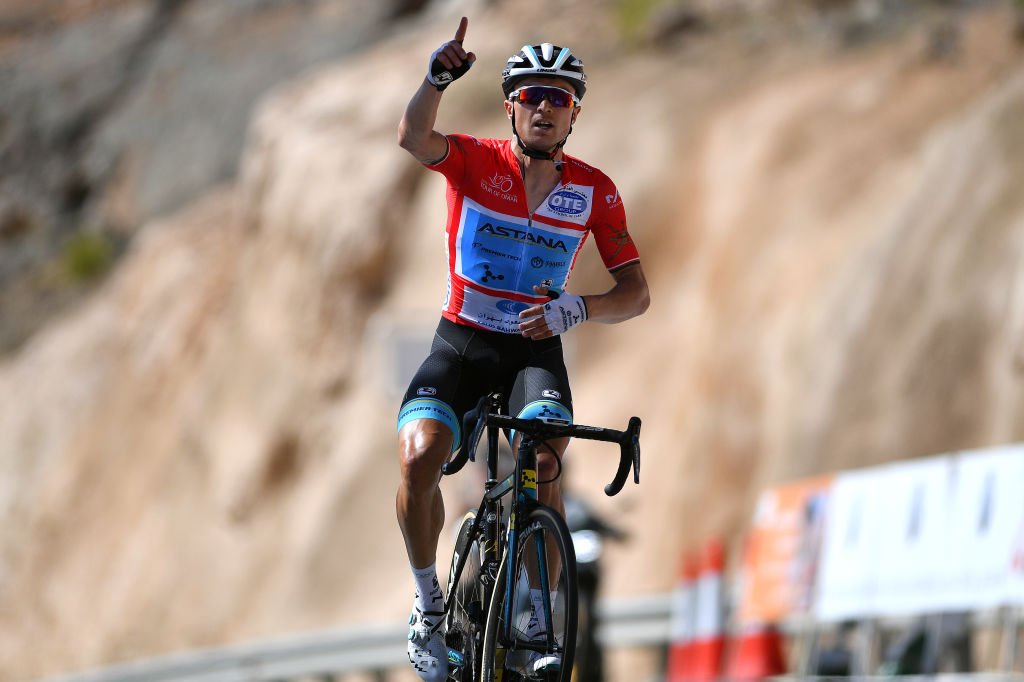 Muscat: Alexey Lutsenko has been confirmed the winner of the 2019 Tour of Oman.
The final leg of the race from Al Mouj to Muttrah Corniche ended on Thursday. Although he did not finish among the top three, the Team Astana rider, who hails from Kazakhstan, had done enough throughout the race to retain his title. Lutsenko had also previously won three of the six stages of the tour, as he emerged in front on days two, three and five.
On the day, however, it was Giacomo Nizzolo of Team Dimension Data who finished first, followed by Sonny Colbrelli of Bahrain Merida, and David Ballerini in third place.
Bahrain Merida’s Domenico Pozzovivo also finished second overall, after suffering a crash while on the bike trail.
A statement from Team Astana said, “It’s official, your 2019 Tour of Oman winner: Alexey Lutsenko!” with the defending champion himself adding, “We will have a celebration, but the main goals of the season are still ahead of us.”
Team Bahrain Merida added, “Sonny Colbrelli sprints to second place in Muttrah Corniche. After the crash, Domenico Pozzovivo was able to cross the line safely in the bunch and grabs second place overall.”
Team Dimension Data also congratulated their riders, adding, “Stage 6 of the 2019 Tour of Oman in the bag! Great ride by Giacomo Nizzolo and Team Dimension Data – well done, guys! Great reward for a super team effort this week.” Jean-Paul van Poppel, the director of sport for team Roompot-Charles, added, “It’s been a difficult Tour of Oman for us, but I saw some positive things as well.”
Nathan van Hooydonck, one of the pro-cyclers for Continuum Cycling’s Pro Team, said, “Tour of Oman done & dusted! A good preparation for what will be one of the most important weeks of the season. Looking forward to the Classics!” André Greipel of Team Arkéa Samsic chipped in, “The team had done everything it needed to do. I was placed really well ahead of the final 300 metres, but then everything stopped at once. I hesitated to throw myself ahead of the rest of the pack, and then, all of the other racers came from behind, and I was unable to even finish the sprint. I wouldn’t want to know what happened to me.”
Alongside Lutsenko and Pozzovivo, it was Jesús Herrada Lopez who also secured a podium finish, and he revealed his excitement at finishing among the top three: “This podium finish in the Tour of Oman would not have been possible without the help of all my companions at Team Cofidis, thanks for the support! Now it’s time to get some rest, regain strength and think about the next adventure.”
The results mean that Lutsenko of Team Astana wins the red jersey for the best individual time, while the green jersey for the best points tally lies with Alexander Kristoff of Team UAE Emirates, and the white jersey for the best young rider is given to Ryan Gibbons of Dimensions Data.
The yellow jersey for the most aggressive cyclist at the 10th edition of the Tour of Oman goes to Preben van Hecke of Sport Vlaanderen Baloise.