India, Saudi Arabia agree on need to turn up heat on supporters of terror: Modi 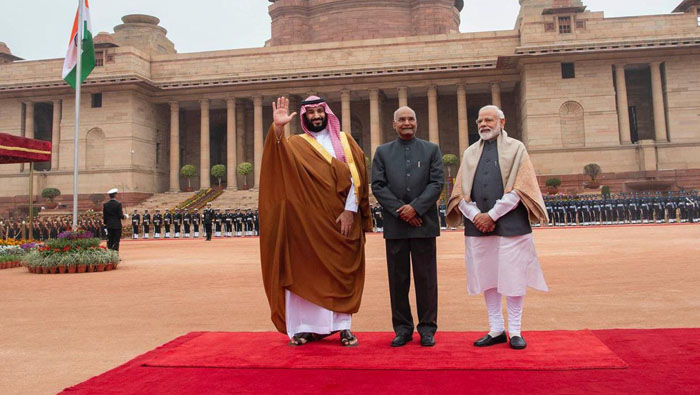 Muscat: India and Saudi Arabia have agreed to work together against countries that support any form of terrorism, Prime Minister Narendra Modi has said.
The remarks were made during the Crown Prince of Saudi Arabia, Mohammed bin Salman bin Abdulaziz Al Saud’s ongoing visit to the South Asian country.
The Saudi leader was given a ceremonial guard of honour at the Rashtrapati Bhavan. Modi also welcomed him with the phrase “Sidiqi, marhaba bekum fil hind (My friend, welcome to India).”
“India is delighted to welcome His Royal Highness Mohammed bin Salman, the Crown Prince of Saudi Arabia.”
Modi added, “The brutal terrorist attack in Pulwama last week is another brutal symbol of the havoc (posed) on the world by this humanitarian threat.
“In order to deal effectively with this threat, we agree that there is a need to increase all possible pressure on the countries supporting any kind of terrorism.”
“At the same time, there is a strong action plan for cooperation against extremism and so that violence and terror do not mislead our youth. I am glad that Saudi Arabia and India have shared thoughts about this,” Modi stated.
The prime minister also confirmed that “for peaceful uses of atomic energy, especially for water desalination and health, there will be another dimension of our cooperation.”
“It’s time to turn our energy relations into a strategic partnership. Saudi Arabia’s involvement in the world’s largest refinery and strategic petroleum reserves leads our energy relations far beyond buyer-seller relationship.”
Speaking on the close ties between the two countries, Al Saud stated, “The relationship between India and the Arabian peninsula is in our DNA.
“We look at Indian people as friends, they played a part in building Saudi Arabia over the past 70 years. I also believe that there are many Saudis that have worked and developed things in India.
“Today we want to be sure that this relationship is maintained and improved for the sake of both countries and with the leadership of the President (Kovind) and Prime Minister (Modi) I am sure we can create good things for Saudi Arabia and India.”
The Saudi Crown prince also met a number of high-ranking officials, including President Ram Nath Kovind and Minister of External Affairs Sushma Swaraj.
His visit comes following the recent terror attacks in Pulwama, which left over 40 Indian paramilitaries dead. India has alleged that Pakistan was behind the attack, a charge Islamabad has repeatedly denied.