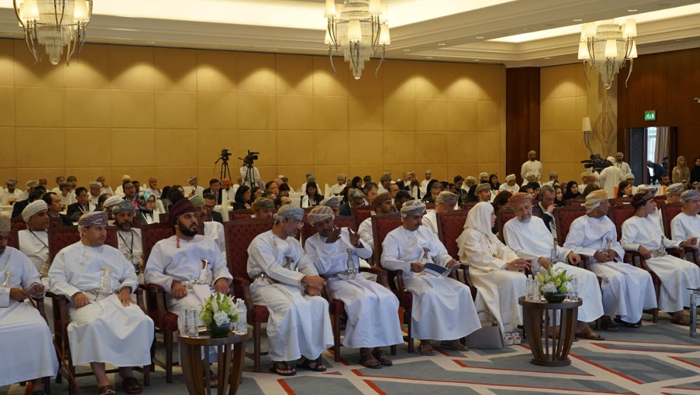 Muscat: Oman Development Bank (ODB) on Wednesday organised an annual symposium in cooperation with the Association of Development Financing Institutions in Asia and the Pacific (ADFIAP).
The event held under the title “Role of Development Finance Institutions (DFIs) in National Development was held under the patronage of Sheikh Fadl bin Mohammed Al Harthy, Secretary General of the Council of Ministers, at the Sheraton Hotel Muscat.
Representatives of dozens of financial institutions representing the member states of the Association, as well as several local and international funding agencies participated in the event. ODB has hosted this symposium for the second time after the first seminar in 2009. The symposium was held in four sessions, which included discussions on self-financing, partnership, technology financing, and green financing. The bank’s objective is to promote sustainable development through the exchange of experiences, exhibitions, and best practices in the field of development through the symposium.
The welcome remarks were given by Abd Elsalam Bn Naser Bin Abdallah Al Kharosi, Chairman of ODB. This was followed by the opening remarks by Phub Dorji, Chief Executive Officer, Bhutan Development Bank Chairman, ADFIAP; and an inaugural speech by Dr Dhafir bin Awadh Al-Shanfari, Chief Executive Officer, Omani Authority for Partnership for Development.
Kharosi said that the seminar dealt with several topics, namely the role of DFIs in supporting entrepreneurship and self-development as well as small and medium enterprises; addressing the challenges facing these institutions; developing infrastructure and logistics; supporting digital institutions, green financing, and other related projects; financing public-private partnership projects, innovative and creative projects with high added value, and knowledge-based projects.
In his inaugural speech, Dr Al-Shanfari stated that global communication has become a main feature of this era, citing that there are more than 7 billion people on this planet. Their needs and aspirations for development are pushing more than 4.5 million passengers around the world to look for development opportunities. In 2017, there was an exchange of only 11 billion tons of goods for trade around the world, with growth expectations reaching not more than 20 per cent over the next few years. A rise of up to 12 percent of world trade confirms the growing development opportunities in all parts of the earth and in all corners of the globe.
He pointed out to the fact that, on one hand, the world now needs to strengthen economic ties between villages and cities to push the national economy towards development. On the other hand, it also causes environmental concerns, such as the elimination of green cover and global warming, which remain the most important challenges for us in the future. Therefore, it is important to find models of development that are based on environmental-friendly methods, in order to create an inevitable balance between the requirements of development and environmental conservation solutions.
“The fourth industrial revolution will open new horizons for the development of tools of knowledge, such as artificial intelligence. He said that the Sultanate has made great strides in the path of economic diversification and its partnership with public and private sectors is in accordance with the national program outputs for the diversification of economic implementation.
At the end of the opening ceremony, Al Harthy and other participants toured the exhibition of Omani small and medium sized enterprises. He praised the ability of the Omani youth to open up new prospects based on the Omani environment.