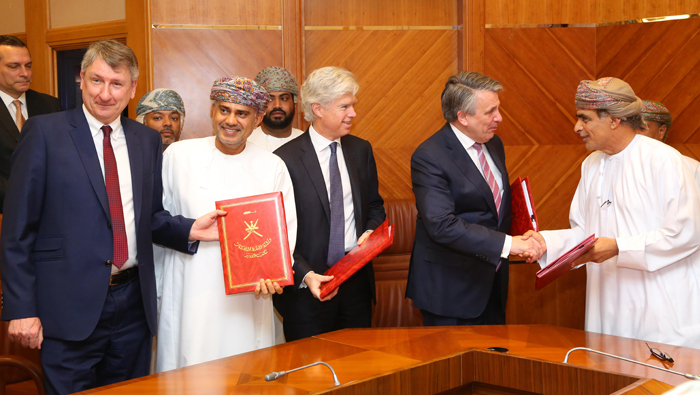 Muscat: An interim upstream agreement was signed detailing funding and a work programme for 2019 for the development of gas resources destined for integrated projects to help meet the Sultanate's growing need for energy.
The signing was done by Dr Mohammed bin Hamad Al Rumhy, Minister of Oil & Gas (MOG), and Shell CEO Ben van Beurden, along with other signatories, such as Petroleum Development Oman (PDO), Oman Oil Company (OOC) and Total.
Wednesday’s upstream agreement covers gas acreage in the northern part of Block 6 located to the west of the existing Saih Rawl gas field that is operated by PDO. The project covers investments in gas exploration and production, in partnership with Total and OOC.
The aim is to integrate the Shell and OOC share of the upstream project with the development of a gas-to-liquids plant (GTL) currently under discussion, to be developed and operated by Shell in partnership with OOC.
Chris Breeze, Shell’s Country Chairman in Oman, said: “Today’s agreement is a significant step forward. We hope that the development of gas resources destined for the integrated projects will play an important role in generating in-country value and diversifying Oman’s economy. This agreement marks a new chapter in Shell’s close partnership with the government of Oman.”
MOG, Shell and partners (OOC and Total) continue to work closely and diligently to finalise definitive agreements, which will underpin the long-term success of the energy projects first outlined in the Memorandum of Understanding signed in May 2018.
Further announcements will be made as and when appropriate.