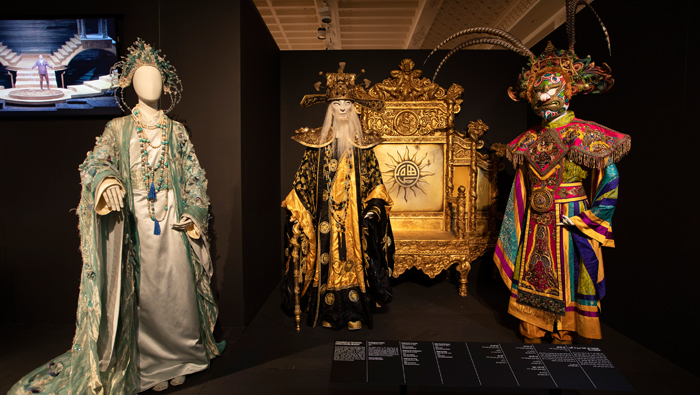 Muscat: Visitors to the Opera Galleria now have a chance to go 400 years back in time to the year 1642 in Venice, where opera began in carnivals.
The new exhibition, “Opera, 400 years of Passion” tells the story of opera’s journey to Oman, according to the exhibition’s description, which has been handed out to visitors.
The exhibition is being held at the newly inaugurated House of Musical Arts at the Opera Galleria in Muscat, and houses more than 200 objects from across Europe that celebrate the story of Opera, and headphones tantalise listeners with position-sensitive tunes that change depending on the area. It is organised by the Opera Galleria and Victoria and Albert (VA) Museum in London.
This story begins in Venice, where Opera first evolved from “private court performances to public entertainment”.
Strolling through this first corner reveals an Archlute from the year 1650, as well as dresses and the painting, “View of Venice.”
The second stop for the exhibition is London, between 1685 and 1759, where Rinaldo premiered in the year 1711.
Purists of the time first believed that Opera had no place in London, a city of culture and literature, but they then introduced elements of English theatre to Opera, which drew spectators. Here, visitors will find the mechanical stage model from Rinaldo by George F. Handel, which can be turned to simulate storms.
One of the centrepieces of the exhibition is a reproduction of a 1788 pianoforte, much like the one played by Mozart, who brought to life the comic opera, Le Nozze di Figaro in Vienna.
The exhibition then takes visitors to 19th century Milan, where Giuseppe Verdi’s Nabaccu premiered in 1842. The exhibition includes a bust of Giuseppe Verde, seen by many as a symbol of piece.
Just before the end is the Parisian corner, where ballet played an important role and the city was being redesigned as a modern city between 1813 and 1883. Here premiered Richard Wagner’s Tannhaeuser, which included controversial redesigned performances.
Finally comes Muscat, where Giacomo Puccini’s Turnadot was directed by Franco Zeffirelli on October 12, 2011.
The VA exhibition is open from 10am to 8pm from Sunday to Saturday, and 3pm to 8pm on Fridays, and tickets to the exhibition can be purchased at the Opera Galleria reception desk in the main atrium, according to a joint statement by VA and the Opera Galleria.