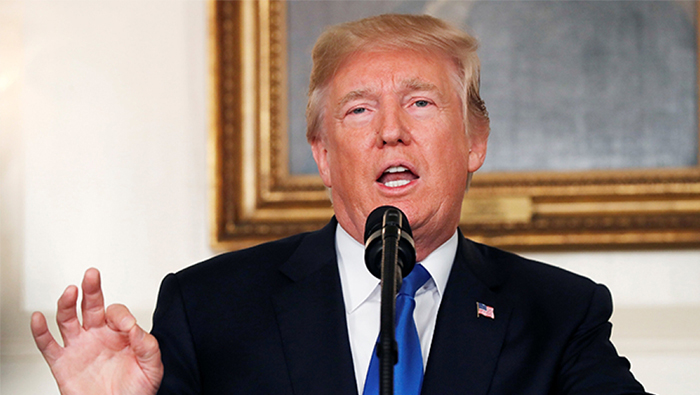 Muscat: Donald Trump has called for 'retribution' and an investigation into television networks after actor Alec Baldwin's latest portrayal of the president on Saturday Night Live (SNL).
Baldwin, who gained international acclaim for playing Trump on the show, reprised the role in a parody of the president's national emergency announcement last week.
Taking to Twitter, Trump said about the sketch "Nothing funny about tired Saturday Night Live on Fake News NBC! Question is, how do the Networks get away with these total Republican hit jobs without retribution? Likewise for many other shows? Very unfair and should be looked into. This is the real Collusion!"
He added, "THE RIGGED AND CORRUPT MEDIA IS THE ENEMY OF THE PEOPLE!"
Trump's tweets were quickly panned by critics.
Democrat Congressman Ted Lieu cited the first amendment in his reply to Trump, tweeting, "Dear Donald Trump: One thing that makes America great is that the people can laugh at you without retribution. The First Amendment allows Saturday Night Live to make fun of you again, and again, and again."
New York Times correspondent Peter Baker said, "It's become commonplace enough in the past two years that it no longer gets much notice. But it's worth remembering that no other president in decades publicly threatened "retribution" against a television network because it satirised him.
"I've interviewed 7 presidents and covered 4 full time over last couple decades. All complained about the press and at times lashed out. But none of them, Republican or Democrat, engaged in the kind of "enemy of the people" rhetoric Trump routinely does," he added.
Legendary comedian Carl Reiner issued a statement of support for the show and Baldwin, saying, "I salute SNL for securing the services of Alec Baldwin who successfully skewered Trump's impression of a sitting president."
Baldwin, who lampooned Trump for his emergency declaration and recent physical, suggested the tweet could constitute a threat against his family.
He said in a statement, "I wonder if a sitting President exhorting his followers that my role in a TV comedy qualifies me as an enemy of the people constitutes a threat to my safety and that of my family?"
The incident is the latest in a long-running feud between Trump and the media, who he frequently refers to as the 'Enemy of the People'.