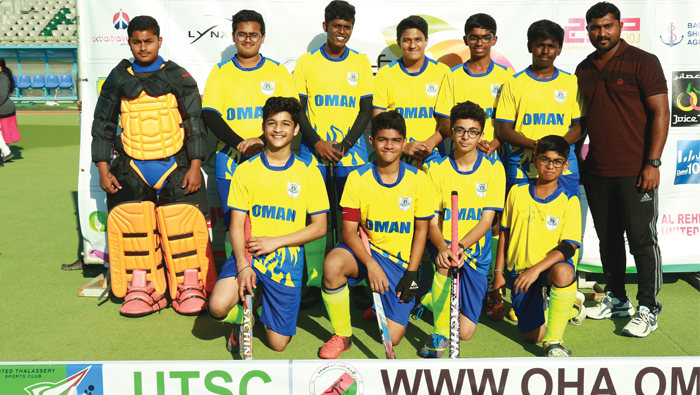 Muscat: Young boys and girls of Indian School Wadi Kabir (ISWK) and Indian School Al Mabellah (ISAM) tested their hockey skills when they met for the junior cup at the Sultan Qaboos Sports Complex Bausher. The tournament organised by United Thalessery Sports Club in association with Oman Hockey Association is a recognised event of Asian hockey federation. In the first match which was played between the girls team, ISAM beat ISWK by 2-0. Elsi scored the first goal for ISAM in the 5th minute of the game through a pass from Nuzha Jawis. Minutes latter, Nuzha Jawis increased the lead with a solo run and ended up in the opposite team net much to the cheers of her schoolmates and the coach Varsha Sen, who herself is a former state hockey player for Madhya Pradesh. However, ISWK boys team took a clean revenge and won the match against ISAM by 4-1 through the brilliance of Adam Raffi and Ronak. Early lead ISWK took the lead early through Ronak and Adam Raffi increased the lead in the 8th minute of the game. Ronak who combined well with Adam Raffi scored again in the 12th minute and Swatik completed the scoreboard with another goal. ISAM came back very strongly in the dying moments of the game and found the goal through Shoaib. By the time ISAM boys found their combination right the game was over. Display of skills Adam Raffi, a 9th standard student of ISWK is himself a member of UTSC, won accolades from the huge spectators for his wonderful display of his skills, temperament and his ability to move with the ball freely. “Adam is developing fast as a hockey player. He is trained by Moni and Nani, the superstars of Team Coorg. And if he finds the kind of supports from his school and parents, he can surely make it to the big stage,” said noted commentator and hockey enthusiast Salih Thacher. Trophies Jhonson Master, President of UTSC, Thalessery unit and the legendary former hockey player SAS Naqvi gave away the trophies in the presence of Talib Al Wahibi, Chairman of Oman Hockey Association. The event was sponsored by Shahi spices, Foodlands restaurant, Malabar Gold, Juice World, Badar al Samaa hospitals, Al Rahwan Contracting, Badar Shipping and Akbar Travels.