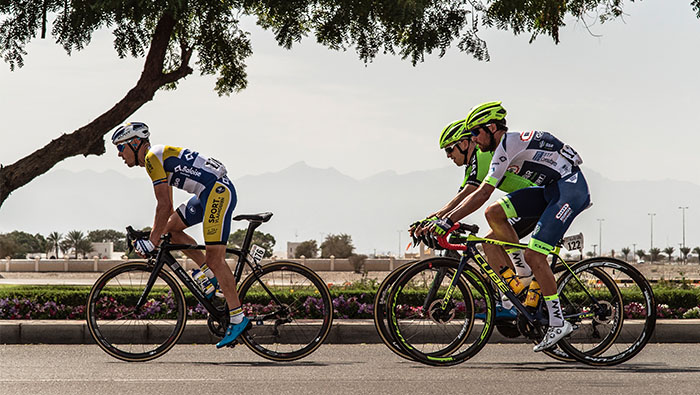 Muscat: Alexey Lutsenko of Astana Pro Team has doubled up with a second stage victory in a row, after a spectacular day of racing on the way to Quriyat at the end of stage three.
The Kazakh champ, who won the race overall last year, was extremely aggressive in the final 50 km, making the most of the wind to wear the peloton before claiming the stage win and the red jersey in the final climb. The Spanish puncheur Jesus Herrada (Cofidis, Solutions Crédits) came second, ahead of the Olympic champion Greg Van Avermaet (CCC Pro Team).
The result means that Lutsenko now leads the stage classification, with a time of four hours, 35 minutes and 48 seconds, but Jesus Herrada is just a second behind, with Greg van Avermaet being just another second behind.
Overall, Lutsenko is still leading with a time of 11 hours, 37 minutes and 37 seconds, and Herrada is 18 seconds off him. Van Avermaet is third with a 20-second delay.
The results mean that Alexey Lutsenko holds both the red jersey, given to the rider with the best individual time, and the green jersey, which belongs to the rider with the most number of points overall. Ryan Gibbons has the white jersey, with the Team Dimension Data rider being currently recognised as the best young rider, while Preben van Heck of Sport Vlaanderen – Baloise has his grip on the yellow jersey, which is given to the most aggressive driver.
Totalling a distance of 156.5 kilometres, the second stage of this year’s Tour of Oman began at the Oman Royal Cavalry base and ended at Al Bustan. The stage is characterised as being hilly. The third stage of the Tour of Oman began in Shatti Al Qurum and ended in Quriyat, for a total distance of 192.5 kilometres.
Earlier, at the end of day two, Lutsenko has put Team Astana in front at the end of day two of the Tour of Oman, followed closely by Alexander Kristoff of UAE Team Emirates, and Ryan Gibbons of Dimension Data.
The first stage of the Tour of Oman kicked off on Saturday, while Alexander Kristoff from the UAE Team Emirates was announced the winner. After covering a distance of 138.5 kilometres, Kristoff topped the sprint clocking in at 2h54m50s, ahead of two Frenchmen, Bryan Coquard from Vital Concept finishing at 2h54m54s and Nacer Bouhanni from Cofidis at 2h54m56s.