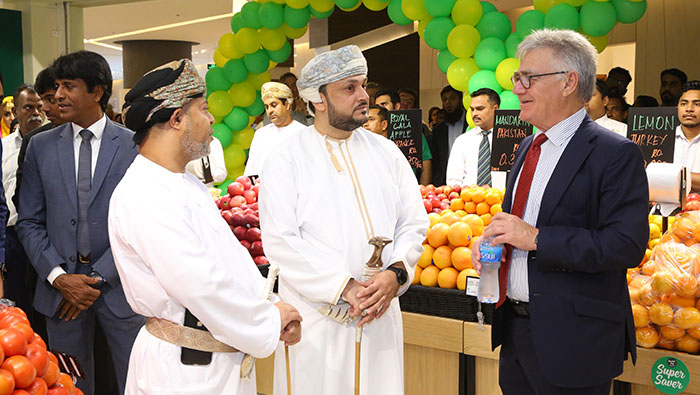 Muscat: One of Oman’s leading supermarket chains is looking to hire more Omanis and buy goods from more Omani companies, as they help promote Omani skills and products.
With a new Spinneys store opening in Madinat Al Arfan, Oman Operations Manager at the international group Naji Al Shaqri said to Times of Oman, “We are close to 60 per cent Omanisation. In six stores, I have two Omani store managers, and I also have six Omani fresh food managers. All of our HR managers are Omani and of course, I’m also an example. We send Omani employees to South Africa and the USA for training. We care about Omanis and Omanisation since as we are in the country, we want to give Omanis priority.”
According to Al Shaqri, this is true not just for hiring Omanis, but also business dealings. The company works with Omani farmers and suppliers in order to make use of the local economy.
**media[1004021]**
Al Shaqri added, “We deal with four local suppliers and six direct farmers, and we have recently signed an agreement with a local company for organic foods such as tomatoes and cucumbers. Furthermore, we are in discussions with other farmers from Quriyat to source foods from them.”
Hilal Al Sarmi, Shura council representative of the Wilayat of Seeb, approved of this effort and said, “Supermarkets currently lead in Oman, and are in fact where I hope to see Omanis. I was happy to see and hear that Omanisation in Spinneys Oman has reached 60 per cent. This is something to be proud of.”
The CEO of Spinneys, Johannes CF Holtzhausen, believes the growth in Madinat Al Arfan is exactly the kind of market Spinneys can cater to, especially with more Omanis who care about their health.
He said, “People think that we target British expats. No, British expats make a small percentage of sales, while the bulk is local. We don’t target ethnic groups, but rather lifestyles. We target people who want to live a healthy lifestyle and focus on not selling the wrong types of oils, or over-sugaring and over-salting. We have a strict set of rules in that regard and if people value a quality lifestyle, we target them.”
“The owner of the business has made it clear in his head that he doesn’t want us to sell anything that he wouldn’t buy for his children or grandchildren. We also try to make the products commercially viable. We are aware that we cater to a specific niche and we are happy to stay there.”
While the company aims at growth, it sometimes opens stores before the market is ready for them.
“We know that if we have a relationship with developers, they build a place like this and the people who live here need a supermarket,” explained Holtzhausen.
“We sometimes open a supermarket before there are enough people. That’s part of it and you don’t necessarily make money the first year, but we open supermarkets for 10 or 15 years, so you need to keep a long-term view.”
According to him, Spinneys is in Oman to stay.
Holtzhausen said, “We will continue to grow. We have opened this store and will rebuild the one in MQ to be much larger. I don’t drive the number of stores, but rather look for locations where my brand will add value.”
“We focus vehemently on quality food in the sense that if we buy produce, we know where it comes from. We don’t want there to be anything that the growers do, which makes the food we sell unhealthy. We like to be fair towards the environment and encourage growers to undertake responsible practices,” he added