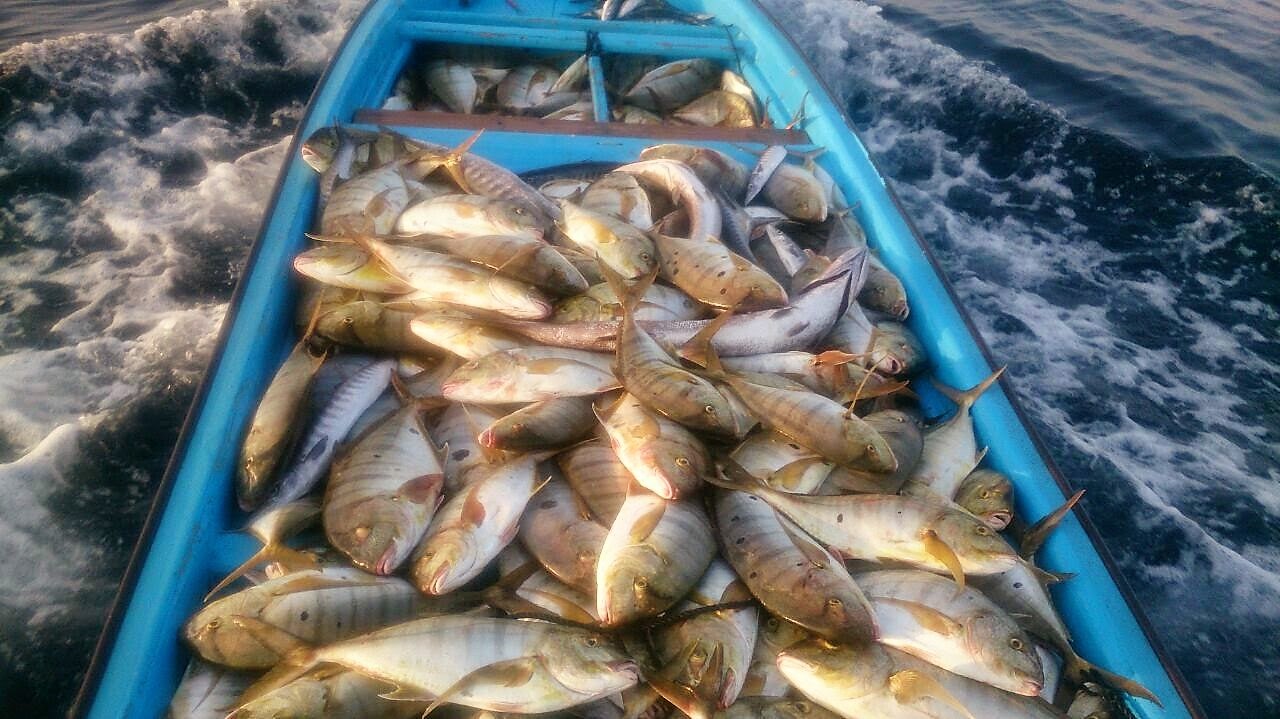 Duqm: The Governorate of Al Wusta enjoys a diverse marine wealth and abundant productivity.
It is rich in Omani fish, such as shrimp, young abalone, Kingfish, Emperor, Grouper and Seabream because of its long coastline overlooking the Arabian Sea. It is considered a fundamental stream for Oman economy in fish production, internally and externally.
A sizable section of the citizens in the coastal wilayats in the Governorate of Al Wusta work in fishing-related professions, including fish transfer and sale.
**media[1003156]**
The Department of Fisheries in the governorate facilitates and regulates the process of landing fish and the implementation of several projects to develop this sector, in addition to the implementation of extension activities and awareness campaigns and programmes for fishermen, to develop and raise their abilities and efficiency in providing fish to the local and foreign markets, as well as to play an effective role in the implementation of regulations and laws aimed at protecting wealth and sustainability through formation of control teams along the shores of the governorate.
Hasan bin Hussein Al Aghbari, Director of Fisheries Directorate in the Governorate of Al Wusta said, “The fish production in the Governorate of Al Wusta in 2017 reached more than 121,000 tonnes, the highest among the governorates, with a value of nearly OMR60 million and an increase in quantity by 47 percent, compared to 2016.”
**media[1003157]**
He added that “the fishing sector provides many employment opportunities in the governorate. More than 5,600 fishermen were registered in the governorate until the end of 2017 with 3,800 fishing boats, 580 fish-transport and marketing vehicles and 172 traditional fishing vessels”.
About fish support and guidance in the Governorate of Al Wusta and Masirah a he said, “The Fisheries Directorate in the Governorate of Al Wusta, represented by the Department of Fisheries Development and Guidance, seeks to develop the guidance work in the governorate through training cadres and enrolling them in courses inside and outside the Sultanate in the fields related to fish guidance, to communicate with the fishermen to refine their talents, methods and guiding styles, to conduct guidance lectures and meetings with the fishermen, and provide devices and tools that help them to perform their duties to the fullest.
He pointed out that the activities of the fish guidance in the governorate’s coastal Wilayats of Mahout, Duqm, Al Jazir and the Wilayat of Masirah amounted to about 226 activities that varied between seminars, meetings, awareness lectures, exhibitions and seminars targeting about 735 fishermen and those interested in the maritime side.
Lujnat Sunan Al Bahr in the Governorate submits proposals and recommendations on the activities related to the fisheries sector, solve the problems facing the fishermen and to identify their needs and provide facilities for them in landing sites and the development of marketing fish.
Among the successful projects for the management of the fisheries in the Al Wusta is “Fishermen’s Complex” in Ras Madrakah, which benefits about 215 traditional fishermen, boat owners and fishermen coming from the Governorates of A’Sharqiyah and Al Batinah, in addition to the owners of transport and marketing vehicles and companies operating in the field of fisheries.
The number of fishermen in the project is 150 and the quantities of production amounted to 120 tonnes during the year 2018, worth about OMR100.000, and the target fish are Kingfish, Yellowfin Tuna, Lobster, Emperor, Grouper, Jacks, Cuttlefish, Cod, Indian Mackerel, and Seabream.
Regarding fish control in the governorate, the Director of the Fisheries Directorate in the Governorate of Al Wusta said that 661 violations have been booked in the past period in the governorates wilayats and the Wilayat of Masirah, including irregularities of migrant workers engaged in illegal fishing, illegal sea nets, fishing of Lobster and Shrimps outside the seasons or the period allowed by the Ministry of Agriculture and Fisheries, and also not to install numbers on fishing boats, in addition to dumping waste into the sea and other irregularities.
He added that there are currently a number of ports that include all the requirements for shipments, landing and loading services, maintenance workshops and fuel stations. These ports are a fishing harbour in Al Lakbi, in the Wilayat of Al Jazir, a fishing harbour in the Wilayat of Masirah, and work is underway for the construction of a large fishing harbour for fishermen in the Special Economic Zone in Duqm. It will be the biggest fishing harbour in the Sultanate.
It is noteworthy that the Fisheries Directorate in the Governorate of Al Wusta has 4 centres in the coastal Wilayats of Mahout, Duqm, Al Jazir, and the Wilayat of Masirah.