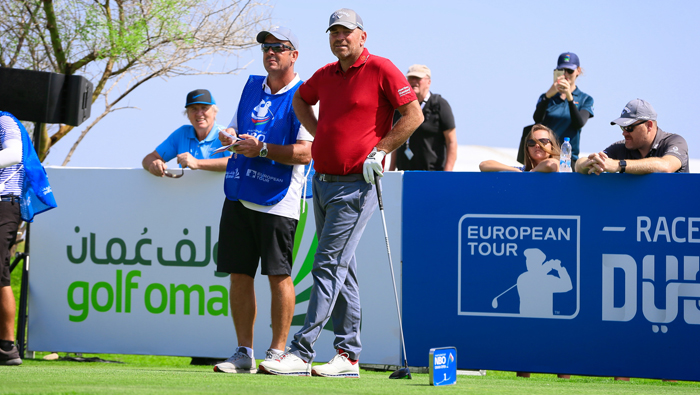 Muscat: With the field now confirmed and the second edition of the Oman Open only two weeks away, this year’s tournament will boast a star-studded line-up full of Ryder Cup stars, multiple European Tour winners, a Major champion and Oman’s very own Azaan Al Rumhy when the Sultanate’s biggest ever professional sports event returns to Al Mouj Golf in Muscat from February 28 – March 3.
Six-time European Tour winner and defending Oman Open champion Joost Luiten headlines the event with the Dutchman targeting another solid performance in the capital after coming out on top of an enthralling final-round battle with close friend Chris Wood to seal the inaugural tournament last year.
“I was surprised by how good Al Mouj Golf was,” said Luiten. “It was my first time playing in Oman and I didn’t know what to expect but I just fell in love with the course. It’s a tough track and there is a stiff wind to contest with so you have to bring your ‘A’ game to be in contention come Sunday. It suits my game and I can’t wait to go back as champion and look forward to defending my title.”
Luiten will be joined by two-time Ryder Cup star and 1999 Open Championship winner Paul Lawrie, who is looking forward to making his season debut at the 2019 Oman Open and returning to action on the European Tour after sitting out most of last year with a foot injury which eventually required surgery.
“I might not be 100% tournament sharp for my first week back after such a long spell on the sidelines, but I’ve got to start playing somewhere and what better place than Oman, where the course and climate are excellent,” said the Scot, who underwent a procedure to repair a ruptured tendon and torn ligaments last September.
“I really liked the Greg Norman-designed course and how well the holes played. My foot was causing me some problems at the tournament last year, so I hope I can make amends and really enjoy myself this time around.”
European Tour stalwarts Robert Karlsson, Thongchai Jaidee, David Howell and 2018 winning Ryder Cup Captain Thomas Björn, who have 39 wins between them on Tour will be going head-to-head with the next generation of superstars, which include 2018 Rookie of the Year Shubhankar Sharma, Belgium’s Thomas Pieters, French duo Alex Levy and Roman Wattell, English pair Tom Lewis and Jordan Smith and South African Brandon Stone, all of whom have at least one win under their belt on Tour.
“The field that played last year tell me it’s an amazing golf course and the best that was on the schedule,” said five-time European Tour winner Howell. “I’m looking forward to competing and seeing a different side of the Middle East rather than in the middle of a vibrant city like Dubai.”
“I absolutely love Al Mouj Golf,” added Smith, who topped the Challenge Tour Rankings in 2016. “It was a great Challenge Tour venue and it came as no surprise when the European Tour decided to host an event there last year. It’s a brilliant place.”
Joining the elite field will be Oman’s top-ranked golfer, Azaan Al Rumhy, who has received an invitation from promoters the Oman Golf Committee to participate in the event for the second successive year.
The 35 year old missed the cut at Al Mouj Golf last year but the Omani is hoping to use that experience as a stepping stone to greater things in this year’s event.
“It will be another great experience playing at the Oman Open again; I’m really looking forward to getting out there and playing my game,” said Al Rumhy.
“Last year was the biggest event I’ve played in and for it to be in Oman made it even more special. I had previously played on the Asian, Mena and Challenge Tours but being involved in a European Tour event was a different level.
“Last year my focus was on trying to enjoy the tournament as much as I could whereas this year I I’m going to try and focus more on my game and hopefully shoot two low rounds and make the cut. That’s the ultimate goal but everyone knows how difficult that is with the calibre of players that will be playing but as long as I give myself a chance I’ll be happy.”
Other notable names competing include two-time Omega Dubai Desert Classic champion Stephen Gallacher, former Ryder Cup players Chris Wood, Edoardo Molinari and Victor Dubuisson as well as history-making Oliver Fisher, who became the first man to shoot 59 in a European Tour event last season at the Portugal Masters.