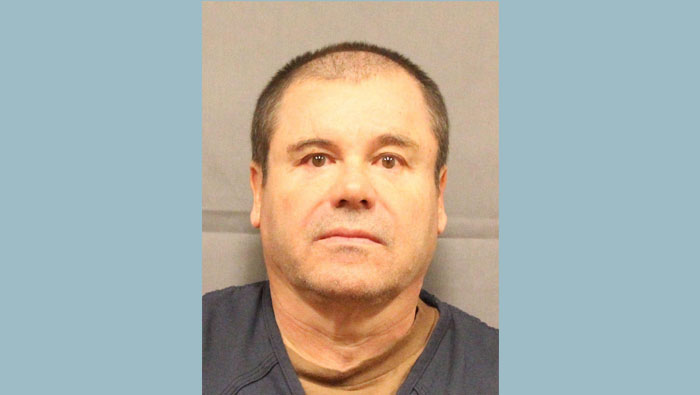 Muscat: Mexican drug cartel leader ‘El Chapo’ Guzman has been found guilty on 26 counts of drug-related violations and one murder conspiracy by a federal jury in New York.
Also known as ‘El Rapido’ among a host of other aliases, Guzman, whose real name is Joaquin Archivaldo Guzman Loera, was found guilty after a 12-week trial, following which US District Judge Brian M.Cogan sentenced him to mandatory life imprisonment.
Guzman Loera was a principal leader of the Sinaloa Cartel, a Mexico-based international drug trafficking organisation responsible for importing and distributing vast quantities of cocaine, marijuana, methamphetamine and heroin into the United States.
The evidence at trial, including testimony from 14 cooperating witnesses, narcotics seizures totalling over 130,000 kilograms of cocaine and heroin, weapons, including AK-47s and a rocket-propelled grenade launcher, ledgers, text messages, videos, photographs and intercepted recordings, detailed the drug trafficking activity of Guzman Loera and his co-conspirators over a 25-year period from January 1989 until December 2014.
Guzman Loera was repeatedly referred to by witnesses as one of the leaders of the Sinaloa Cartel.
He oversaw the smuggling of narcotics to wholesale distributors in Arizona, Atlanta, Chicago, Los Angeles, Miami, New York, and elsewhere. The billions of illicit dollars generated from drug sales in the United States were then clandestinely transported back to Mexico.
Guzman Loera also used “sicarios,” or hit men, who carried out hundreds of acts of violence in Mexico to enforce Sinaloa’s control of territories and to eliminate those who posed a threat to the Sinaloa Cartel.
Acting Attorney General Matthew G. Whitaker said, “I am pleased that the Department has brought Joaquin Guzman Loera (El Chapo) to justice by securing a conviction against this drug kingpin, who was a principal leader of the Sinaloa Cartel.
As was clear to the jury, Guzman Loera’s massive, multi-billion dollar criminal enterprise was responsible for flooding the streets of the United States with hundreds of tons of cocaine, as well as enormous quantities of other dangerous drugs such as heroin and methamphetamine.
He added, “The trial evidence also overwhelmingly showed that Guzman’s unceasing efforts to expand his cartel’s control and consolidate its power left a wake of corruption and violence in communities in both Mexico and the United States. This case demonstrated the extraordinary reach of the US government, our tenacity and commitment to pursuing kingpins like Guzman whom — if their power is unchecked — will, like Guzman, develop what for 25 years was an almost unstoppable capacity to move massive quantities of drugs into our country.
“Guzman had the capital to absorb huge losses and run his enterprise with impunity; the enormous power to corrupt, and the capability to employ violence on a massive scale,” explained Whitaker.
“This case, and more importantly, this conviction serves as an irrefutable message to the kingpins that remain in Mexico, and those that aspire to be the next Chapo Guzman, that eventually you will be apprehended and prosecuted.
"Finally, this verdict demonstrates that the United States, working in close partnership with the Mexican government, will continue to bring all possible resources to bear in its fight against international drug traffickers and their violent organisations.”
This case is the result of the ongoing efforts by the Organised Crime Drug Enforcement Task Force, a partnership that brings together the combined expertise and unique abilities of federal, state and local law enforcement agencies.
The principal mission of the OCDETF program is to identify, disrupt, dismantle and prosecute high level members of drug trafficking, weapons trafficking and money laundering organizations and enterprises.
A number of nations, including the US, Mexico, Ecuador, the Netherlands, Dominica and Colombia pooled their resources to nab Guzman.
Within the US, a several agencies, including the Federal Bureau of Investigation, the Bureau of Alcohol, Firearms, Tobacco and Explosives, the Drug Enforcement Administration, the US Marshals Service, the Internal Revenue Service, the New York Police Department, and New York State Police were involved in the investigation.