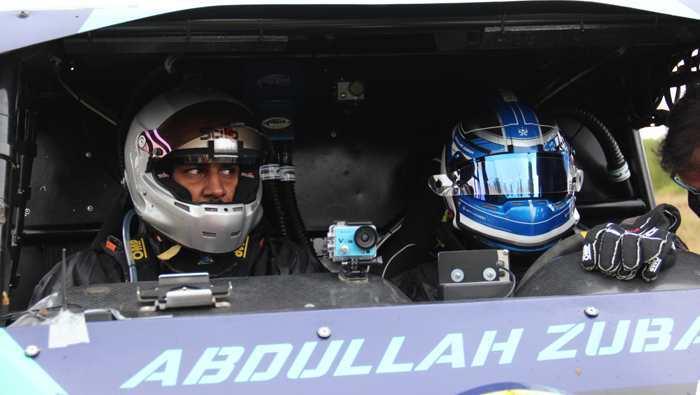 Muscat: Omani rallying team AZ Racing gets its 2019 season in the FIA World Cup for Cross Country Bajas underway in the snowy climbs of Russia on 15th February, where driver Abdullah Al Zubair and co-driver Faisal Al Raisi will be targeting a successful start to their championship campaign.
Making history this year as the first all-Omani entry in the prestigious global series, and actually the first all-Arab line-up as a result, Al Zubair and Al Raisi cannot wait to get started in their quest on the stages of the only Baja on the calendar which features the challenges of driving on snow and ice.
Round one of the FIA World Cup for Cross Country Bajas in the Republic of Karelia begins on Friday with the ceremonial start and prologue at Helyulya Airfield in the Ruskeala mountain park, close to the border with Finland, ahead of leg one later that afternoon.
The teams will compete over a combined distance of some 500km through protected forests in the Sortavala and Suojarvi districts with leg two on 16th February, and leg three of the Baja Russian Northern Forest following on 17th February.
Al Zubair will pilot the same Can-Am Maverick X3 ‘rally raid’ vehicle in the T3 class which he raced in selected Baja rounds in 2018 with Al Raisi alongside, the pair making headlines with an outright top six finish in Spain and then going further still in Poland where they finished in second place.
Once again, German squad South Racing will provide the engineering strength behind AZ Racing’s efforts in 2019 where Al Zubair and Al Raisi will compete across more than 14,000 kilometres in total in the FIA World Cup for Cross Country Bajas and also the FIA Cross Country Rally World Cup, the latter begins in Qatar next week.
Looking ahead to this weekend’s action, the Omani duo will face plenty of challenges in the demanding Russian forests with the biggest test undoubtedly the freezing cold weather – something they’re not entirely used to in the searing temperatures of Oman!
Abdullah Al Zubair: “I am very excited to start our season in Russia because of the many challenges we will face as it is the only snow rally in the World Cup. We have worked hard during the off-season to prepare mentally and physically and, hopefully, this weekend it will all pay off with a podium, as that is why we are here.”
Faisal Al Raisi: “It’s good to be back in international competition after a few months, we have both been preparing ourselves for the season but obviously the freezing conditions in Russia are a new challenge for both the driver and myself as the navigator. It is my first time to navigate on ice and it will be the first time for Abdullah to race in these conditions, however, we are very confident we will achieve something this week.”
Following administrative and scrutineering checks on Friday, February 15, leg one of the Baja Russian Northern Forest will begin at 14.00 (local time). On Saturday, February 16, leg two starts at 08.20 (local time) with leg three on Sunday, February 17, beginning at 08.20 (local time) as well.