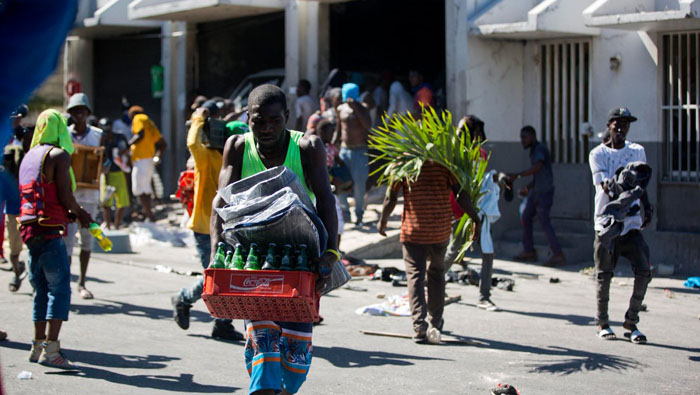 Port-au-Prince: At least six people have died as thousands of protesters demanding regime change clashed with police in Haiti's capital Port-au-Prince.
Protests in the Caribbean state entered their fourth day, with protesters battling police and stoning the home of President Jovenel Moïse.
Frances Francois, a Haiti-based activist, like many of her compatriots, is calling for the president to leave immediately.
She explained, "What started off as anti-corruption protests has become a condemnation of the entire structure of inequality, high cost of living, and lack of opportunity and social services.Haitians are livid...to put it mildly.
"Rather than try to make concessions early on or meet with the protesters like Macron and the similar Yellow Vest protests, President Moïse stood by and let the protest overshadow everything else. Almost a year later, they've brought the country to a standstill," she added.
"I think every Haitian is just waiting for what comes next-holding close to our hopes for Haiti.Thirty three years after the end of the Duvalier dictatorships, this is, unfortunately, where we find ourselves yet we would never forsake the will of the people."
The protests, Francois added, were democratic."In Haiti, the Presidents mandate to lead comes from the people. When he no longer represents the people, he must go."
In a statement shared by Miami Herald Correspondent Jacqueline Charles, Youri Chevry, mayor of the city, said, "The police are working non-stop, and with all of the trouble taking place right now I don’t think they can guarantee the security of the population."
The country, Charles said, "remained on lock down."
Long-time Haiti researcher Jake Johnson is one of many who believe the protest could result in a collapse of government, saying, "The economy is crumbling, and the government has nowhere near the resources to address it. The president’s calls for dialogue have fallen on deaf ears. Reshuffling ministers won’t do anything."
"I believe what we are witnessing is the collapse of a system. A system that has failed the Haitian people. There are no more quick fixes; there are no more internationally devised compromises to paper over the reality. I fear that things will get worse before they get better."
Regional cooperation body the Caribbean Community (CARICOM) issued a call for peace in Haiti.
"The Caribbean Community (CARICOM) is deeply concerned about the continuing violent protests in Haiti, which have resulted in the loss of life, property, destruction of infrastructure and caused grave distress," the body said.
It continued, "The community calls for calm and a cessation of the violence, appealing to all involved to engage in constructive dialogue and to respect the constitution, the rule of law and democratic processes so that issues can be resolved in a peaceful atmosphere and allow for the return to a state of normalcy."
Members of the UN-backed 'Core Group' issued a statement about the unrest, also calling for calm. The group is made up of Special Representative of the United Nations Secretary-General, the Ambassadors of Brazil, Canada, France, Germany, Spain, the European Union, the United States of America, and the Special Representative of the Organisation of American States.
The statement read, "The Core Group deplores the loss of life and property damage caused by the unacceptable acts of violence that took place on the margins of the rallies, while acknowledging the professionalism demonstrated by the Haitian National Police as a whole.
"The group members call on the Haitian society actors, and primarily the country's leaders, to engage in a constructive and inclusive dialogue in order to identify and implement realistic and lasting solutions to the political and economic crisis currently occurring in Haiti."
Meanwhile, the French Embassy in Haiti warned against travelling to the country until further notice.
A statement issued by the embassy read, "In recent days, the violence in Haiti (shooting, roadblocks, attempts to loot...) have claimed several victims and caused significant material damage.
It added that the "situation remains very tense in Port-au-Prince. A call for blocking the country was launched by several movements. It is recommended to postpone travel to Haiti until further notice."