Married Indian women abroad to get Govt protection against abuse 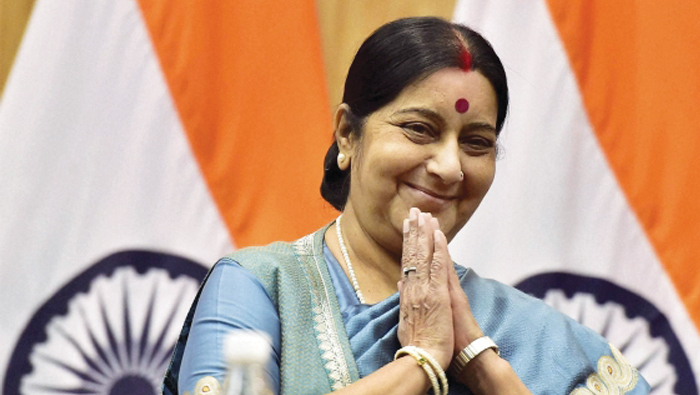 Muscat: Married Indian women who live and work in Oman and other foreign countries will now receive protection from the government of India, should their husbands be found guilty of abusing them.
The Registration of Marriage of Non Resident Indian Act, 2019, a new act issued by Sushma Swaraj, India’s Minister of External Affairs, was announced in the Rajya Sabha, the Indian government’s upper legislative house, following several complaints registered by overseas Indian nationals over their mistreatment and harassment.
Should a wife raise complaints against her husband while living overseas, the Indian government has the right to confiscate or revoke the passport of the abuser, thereby prohibiting him from travelling, as well as provide all the rights available to the abused, under common marriage and family laws. The law also holds good in case a husband faces abuse from his wife.
To ensure all rights are provided to victims of marital abuse, NRIs who are married are required to compulsorily register their marriage within 30 days of the date of the marriage, either in India or overseas. Failure to do so will empower the courts to issue a summons or warrant through a specially designated website of the Ministry of External Affairs, and also provide rights over the property of that NRI, if he/she fails to appear in court, and is declared a proclaimed offender.
Swaraj stated, “There have been several reports of Indian women being trapped in fraudulent marriages with NRIs. This has indeed emphasised the persistent need to build safeguards in order to protect those spouses from such situations. Therefore, it is necessary that the marriage, solemnised or otherwise in India or outside India, shall be registered within a period of 30 days from the date of the marriage.”
She added, “It has been decided to bring in a legislation to provide for the compulsory registration of marriage for better enforcement of the rights of deserted spouses under various family laws. Accordingly, the Registration of Marriage of Non-Resident Indian Bill, 2019, proposes to provide for the compulsory registration of marriage by an NRI within a period of 30 days from the date of the marriage.”
This bill also seeks to amend the Passport Act, 1967, and the Code of Criminal Procedure, 1973. The proposed amendment of the Passport Act, 1967, empowers the passport authority to impound or revoke a passport or travel document of an NRI, if it is discovered that the NRI hasn’t registered his/her marriage within a period of 30 days from the date of the marriage.
Amendments
The proposed amendments to the Code of Criminal Procedure, 1973, would also empower the courts for the issuance of summons and warrants through the specifically designated website of the Ministry of External Affairs of the government of India. It further provides for the attachment of the properties, both movable and immovable, belonging to the proclaimed offender.
Raveesh Kumar, the official spokesperson of the Ministry of External Affairs, called this a “significant step towards ensuring the safety of women married abroad. External Affairs Minister Sushma Swaraj introduced a path-breaking bill on the registration of marriage of NRIs in the Rajya Sabha, to offer greater protection to Indian women married to NRIs”.
PM Jabir, the community welfare secretary of the Indian Social Club in Oman, welcomed this law, saying it was the first ruling designed to help overseas Indians, adding that there was no law to previously help them seek redressal.
“If we go to the Omani courts, they want to help us but they cannot, because this is outside their jurisdiction,” he told Times of Oman. “They very politely tell us that they cannot help us, because they have no ruling in this matter, so you have to go to an Indian court and file complaints there. In the Gulf countries, the pressing concern is the husband abandoning the wife and not providing support.”
Indian Embassy
“This is a very good law,” added Jabir. “This is the first time such a law has come in, because previously, even the Indian Embassy could only offer limited support. Now that this has come, we will wait to see how it is rolled out, but this is a very, very good step. Earlier, we could do very little to help them, and we used to get many cases, but this is a law that was very much required.”