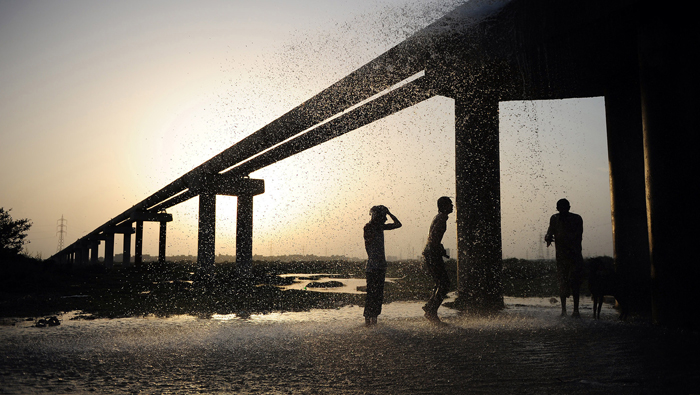 Paris: The last four years were the hottest since global temperature records began, the UN confirmed on Wednesday in an analysis that it said was a "clear sign of continuing long-term climate change."
The UN's World Meterological Organisation said in November that 2018 was set to be the fourth warmest year in recorded history, stressing the urgent need for action to rein in runaway planetary warming.
On Wednesday it incorporated the final weeks of last year into its climate models and concluded that average global surface temperature in 2018 was 1 degree Celsius (1.8 Fahrenheit) above pre-industrial baseline levels.
2016, boosted by a strong El Nino that normally tips the mercury northwards, remains the hottest year on record. It also said that the 20 warmest years in history all occurred within the last 22 years.
"The long-term temperature trend is far more important than the ranking of individual years, and that trend is an upward one," said WMO Secretary-General Petteri Taalas.
"The degree of warming during the past four years has been exceptional, both on land and in the ocean."
The WMO said heightened temperatures also contributed to a number of extreme weather events such as hurricanes, droughts and flash flooding.
"Many of the extreme weather events are consistent with what we expect from a changing climate. This isthe reality we need to face up to," Taalas said.
The UN body also said that 2019 had picked up where 2018 left off, with Australia experiencing its warmest January on record. It warned that intense heatwaves "are becoming more frequent as a result of climate change."
As parts of the mid-western United States were gripped by a "polar vortex" last week that saw temperatures plunge to lows of -64 degrees Fahrenheit (-53C), US President Donald Trump suggested that the cold weather front cast doubt over the veracity of climate change data.
"What the hell is going on with Global Waming? (sic) Please come back fast, we need you!" he said on Twitter.
Taalas said that the deadly cold snap was entirely consistent with the effects of manmade climate change, including the warming of the poles.
"A part of the cold anomalies at lower latitudes could be linked to dramatic changes in the Arctic," he said.
"What happens at the poles does not stay at the poles but influences weather and climate conditions in lower latitudes where hundreds of millions of people live."