On the Ball: Qatar did not forget their ‘responsibility’ at the Asian Cup 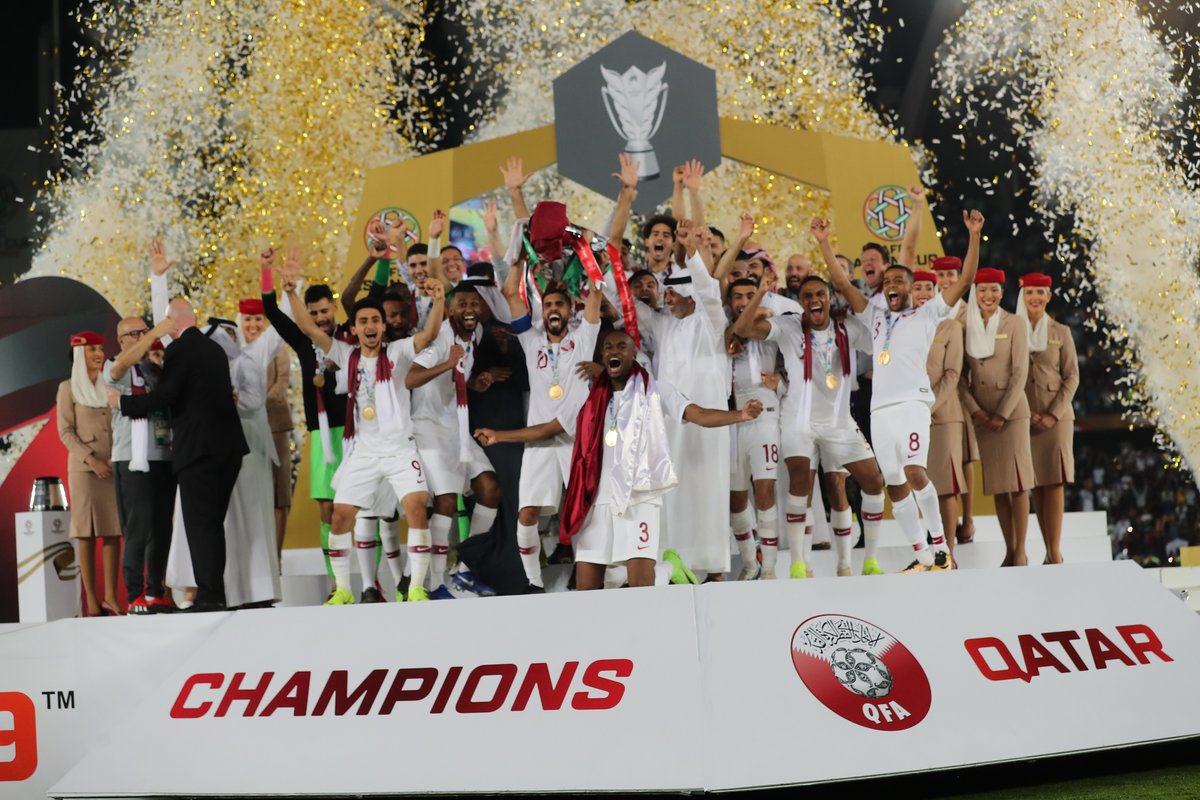 Muscat: Former Qatar international footballer Adel Lami asking his team mates to remember what they were playing for in the Asian Cup final would have surely struck a chord with the national team.
Qatar went on to beat heavy favourites Japan 3-1 in the final of the 2019 Asian Cup, which was held in the UAE, making this the first time they’d won the tournament – a fitting statement from the men in maroon, as they gear up toward hosting the 2022 FIFA World Cup.
“For me, every player who wears Qatar’s crest on his chest is excellent and deserving,” said the former midfielder. “Every player who wears it will be capable of carrying that responsibility. At the same time, my message to them is, if you wear that crest, you should know your responsibility.
“You should know that there are a lot of players who shed tears hoping that they would be able to wear this jersey,” added Lami, who was born in Kuwait but chose to represent Qatar after moving there in 1999. “Your role is to represent the people, and the same is true for other countries as well. The current team has some excellent players, and the footballing mentality of these players is very different, compared to the past.
Qatar faced hosts United Arab Emirates in Abu Dhabi on Tuesday evening, and having soundly beaten then 4-0, 33-year-old Lami used the opportunity to remind the players representing the country that they carry with them the hopes and dreams of Qataris everywhere.
“What’s great about this current generation is that whichever Asian team they play against, regardless of their strength, they go into the game knowing that they are capable of defeating this team,” he said. “They have the maturity to deal with the big and important games.”
En route to that triumph, Qatari striker Almoez Ali ensured he too entered the history books. He scored nine goals in the tournament, including the opener in the final, a stunning bicycle kick that took him past the record of Iranian Ali Daei, who’d previously set the record for the most number of goals scored in a single tournament.
Abdulaziz Hatem made it 2-0 to the tiny Gulf state against the Japanese, who would’ve surely been expected to win the Asian Cup. The Samurai Blue have won it on four occasions in the past, and are the tournament’s most successful team, but a blistering drive past goalkeeper Shuichi Gonda meant the Qataris were on their way to lifting the trophy.
Striker Takumi Minamino did pull a goal back, but leading assist maker Akram Afif made it 3-1 with eight minutes to go, and as the Qataris look back on a tournament they won through hard work and dedication, they can look back on the upsets that brought them their first success.
Qatar scored 19 goals throughout the tournament and conceded just the one, and while they did beat Japan in the final, the world stood up and took notice of them when they stunned two-time champions South Korea in the quarter-finals. One of those who featured for the Qataris in that game was defender Tarek Salman, who before the game had pointed out the Koreans’ danger-man – Tottenham Hotspur attacker Son-Heung Min.
The versatile forward was given special dispensation to arrive late for the tournament, as he wanted to feature in his club’s game against Manchester United, but was unable to make his mark at the Asian Cup.
“I am definitely happy that I will be playing against Son-Heung Min,” Salman had said before the game. “He is a big player who plays in the Premier League. We are ready for him. There are no special instructions for playing against him, but we need to be cautious because he is an important player, and an important element of the Korea Republic team.
He added, “The Korea Republic team don’t lose the ball easily and they are fast. They also have a lot of experienced players who played in the World Cup and most of them play for European teams, so they definitely have the experience needed to advance in the tournament. It gives us a push to keep going and continue preserving our clean sheets.”
Qatar are one of the few teams in the tournament to go through the tournament without conceding a single goal, and Salman said his team were motivated to do better when they saw their fellow Arab nation Bahrain push Korea all the way to extra time, thereby showing them that raising their game could actually result in a victory against the East Asians, which is exactly what happened.
“That is definitely a good thing and a target for us, to end tomorrow’s game without conceding any goals,” Salman had said before the game. “It’s also good to see how the Bahraini team competed strongly, with the Koreans taking the game to extra time. God willing, we can beat them.” And beat them they did.