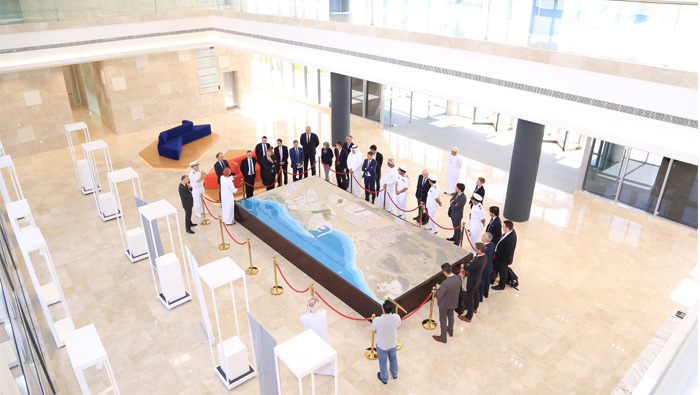 Duqm: Yahya bin Said Al Jabri, Chairman of the Special Economic Zone Authority of Duqm (SEZAD) received in Duqm yesterday a French delegation comprising 21 representatives from the public and private sectors headed by Renaud Salins, French Ambassador to the Sultanate.
The two-day French delegation’s visit to the Special Zone in Duqm aims at establishing an alliance of French companies, which included four major French investors and technology providers.
During the visit, Colas joined the alliance of four French companies that was launched in February 2018.
The delegation met with a number of officials from SEZAD to complete the possibility of cooperation to achieve common commercial and economic interests between the two sides.
Renaud Salins, Ambassador of the French Republic to the Sultanate, expressed his pleasure to visit the Special Zone in Duqm and the success of the formation of the French business association among the most prominent French companies and increase the presence of French companies and ships in Duqm.
He stressed the deep historic relations between the two countries, as the Sultanate and the French Republic have developed and maintained their close relations, which span more than three centuries.
The relations between the two fleet were formed more than 200 years ago. He pointed out that this alliance is an ideal model for what these companies can offer, in addition to good services and technologies, as well as training, education and job creation.