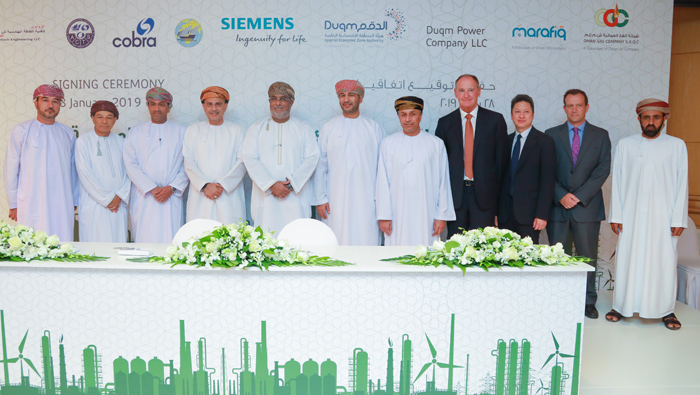 Muscat: Five agreements have been signed for the establishment of the Duqm Integrated Electricity and Water Station, which will receive US$480 million in investment.
Al Duqm Power Company, a joint project between the Central Utilities Company (Marafiq), a subsidiary of Oman Oil Company under Oman Gas Group, and Gulf Pacific Holding Company, signed five agreements for the construction of an integrated power and water plant in Duqm.
Work on the project is expected to last for 46 months and the initial operation of the plant is expected to start in the third quarter of 2020.
The ceremony included the signing of the rights to land use for a period of 25 years for the construction of an integrated power and water plant in the Special Economic Zone of Duqm (SEZD).
The agreement was signed by Yahya bin Saeed Al Jabri, Chairman of the Special Economic Zone Authority at Duqm (Sezad), and by Eng. Essam Bin Saud Al Zadjali, CEO of Oman Oil Group.
The 45-hectare project, which is adjacent to Duqm Refinery and Petrochemical Industries Complex, is the first-of-its-kind project by Oman Oil Company in the energy infrastructure sector.
In the first phase, the plant will provide power and water treatment exclusively to Duqm Refinery and Petrochemical Industries.
Sultan Bin Hamad Al Bartmani, Acting General Manager of Oman Gas Company, and Eng. Abdullah Bin Mohammed Al Hashemi, General Manager of Marafiq Company, also signed a long-term service agreement with Siemens for 25 years to maintain the industrial turbines and steam turbines and control systems of the plant. The agreement also included the supply and construction of the integrated plant for electricity and water and associated facilities.
Eng. Essam Bin Saud Al Zadjali, Chief Executive Officer of Oman Oil Company, said: "The project comes within the Sultanate's plan for economic diversification and the translation of the Omani Oil Group's vision to provide integrated central services for our current and future projects in SEZD."
"This is the first project of its kind in the field of central utilities and serves as the cornerstone of the region's electricity and water infrastructure and will form an integral part of Oman Oil Company's pillars," said Sultan bin Hamad Al Bartmani, Acting CEO of Oman Gas.
"We are very pleased with this achievement, which translates Oman's oil strategy into the energy infrastructure sector," said Eng. Abdullah bin Mohammed Al Hashemi, General Manager of Marafiq.