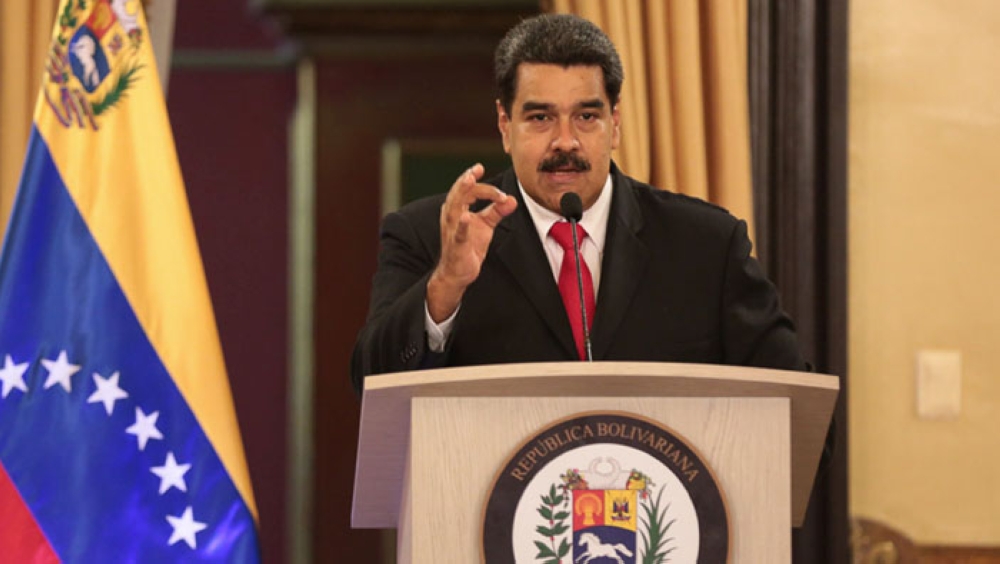 Caracas: Venezuelan President Nicolas Maduro hit out on Wednesday at military "mercenaries" he says are conspiring to divide the armed forces and plot a coup as the opposition planned a new protest to force the socialist leader from power.
Maduro accused an "oligarchy" in neighbouring Colombia of being behind an attempt by military deserters to drive a wedge between himself and his loyal forces, which are key to the leader's hold on power faced with mounting international support for self-proclaimed acting president Juan Guaido.
Six major western European countries have set a weekend deadline for Maduro to call elections or they too will recognize Guaido as interim president.
In a telephone call, US President Donald Trump congratulated Guaido on his "historic assumption of the presidency," giving him a new sense of legitimacy, the White House said.
Speaking at a parade of 2,500 military personnel in Caracas, Maduro declared: "Where there are mercenary traitors, justice!"
It came just hours before a midday strike announced by opposition leader Guaido. The strike aims to "demand that the armed forces side with the people" after bloody clashes following protests last week left more than 40 people dead and 850 incarcerated.
Oil-rich Venezuela has suffered an economic meltdown marked by hyperinflation and shortages of basic necessities that has left millions in poverty, while 2.3 million more have fled the country.
"Venezuela has risen up to dream of the country we want to be," said Guaido. "We must take to the street."
In an interview with the German daily Bild, he called on EU countries to impose more sanctions on Maduro's government. The US slapped oil sanctions on Maduro's regime earlier this week in an attempt to starve the government of its funding.
Another mass street demonstration is planned for Saturday. National Assembly president Guaido wants Maduro to step down so he can set up a transitional government ahead of new elections.
In an interview with Russia's RIA Novosti agency, Maduro said he was willing to negotiate with the opposition and, mockingly, even offered to bring forward parliamentary elections.
"I am ready to sit down at the negotiating table with the opposition so that we could talk for the good of Venezuela," said Maduro, 56.
"It would be very good to conduct parliamentary elections at an earlier stage."
But France said Maduro has not responded to an EU demand for elections.
Although in opposition hands since 2015, parliament has been sidelined since 2016 as the regime-loyalist dominated Supreme Court annuls its every decision. Maduro created a rival legislature -- the Constituent Assembly -- made up exclusively of his supporters.
What Guaido and the National Assembly are demanding, though, is presidential elections, something Maduro is unwilling to countenance.
"Presidential elections in Venezuela have taken place, and if imperialists want new elections let them wait until 2025," he said in an apparent reference to Washington.
The United States, the European Union and many Latin American countries joined the opposition in dismissing the legitimacy of presidential elections Maduro won in May. Several opposition leaders were unable to stand due to being imprisoned, exiled or barred, leading to a boycott from their parties. Guaido, 35, says Maduro is "illegitimate" and launched a direct challenge to the former bus driver's authority last week when he declared himself acting president.
He has received backing from the US and several major countries but it is the support of the military that he needs most to drive Maduro out of power.
The military high command remains loyal to Maduro but Guaido has tried to convince the rank and file to switch sides.
Last week, a group of soldiers rose up against Maduro while Venezuela's military attache to Washington deserted the president on Saturday.
The US has urged Venezuela's armed forces to "accept the peaceful, democratic and constitutional transfer of power."
"The regime is in its final throes," said Guaido.
The United States has refused to rule out military intervention in Venezuela and Donald Trump's National Security Advisor John Bolton was even photographed on Monday at the White House holding a notepad with the scrawled line: "5,000 troops to Colombia."
A furious Maduro said Trump would have "blood all over his hands" if violence breaks out in Venezuela.
In a tweet, he urged the opposition to "ignore the imperialist calls" and reiterated his offer of dialogue to Guaido. He has previously accused the US of trying to orchestrate a coup.