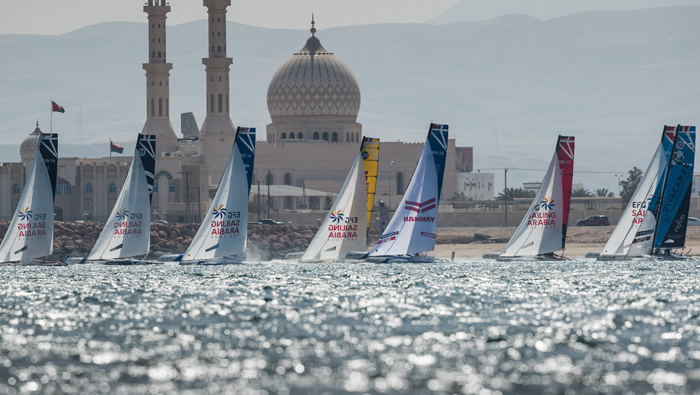 MUSCAT: Oman Shipping Company, has entered a team in EFG Sailing Arabia - The Tour, the Gulf region’s leading yacht racing event which starts in Muscat this weekend.
The Oman Shipping Company (OSC) will support a top-line entry in the two-week challenge that will take a fleet of 10 high-performance yachts to several coastal venues in Oman before the finale in Salalah.
OSC’s commitment to EFG Sailing Arabia - The Tour was announced at a ceremony held at Oman Sail headquarters in the presence of senior management from both companies. It marks a further development in the relationship between the organisations, the two having previously collaborated on a variety of community projects.
“We are delighted to welcome the Oman Shipping Company to the Middle East’s premier competitive yacht racing event,” said Oman Sail CEO David Graham.
“Oman Sail and Oman Shipping Company share a number of common goals, including the mission to celebrate and reinvigorate the Sultanate’s long-standing maritime heritage. We are both also closely involved in developing the skills and abilities of young people as part of an on-going investment in the future of Oman.”
“Taking part in EFG Sailing Arabia - The Tour is an ideal opportunity for us to revive the maritime history of Oman and sea sports through our relationship with Oman Sail, and help showcase the great natural beauty of Oman” said Abdulqadir Al Sayari, General Manager Corporate Support.
“The event itself is a perfect complement to our maritime business and will allow us to extend our corporate engagement at the key stopovers during the Tour. It also coincides with OSC’s corporate social responsibility objectives and we will be extending our programme of sailing days with children with special needs following the event.”
Starting on February 3, EFG Sailing Arabia - The Tour will take a 10-strong international fleet from Muscat to Sur, Ras Al Hadd, Masirah Island, Duqm and the final in Salalah on February 16.
The competitive Oman Shipping team will be led by British skipper Stevie Morrison and crewed by French yachtsman Quentin Ponroy and Oman Sail instructor Raad Al Hadi, who won SATT in 2017 with EFG and raced with Oman Sail’s Class 40 team last year. Morrison and Ponroy took third place in last year’s SATT, and British Olympian Morrison finished fourth in the classic French Tour Voile event with Oman Sail’s #SailingArabia team.