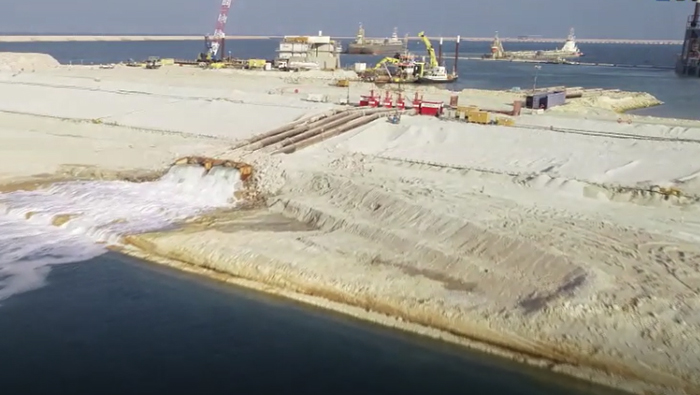 Muscat: Boskalis Westminster (Oman), the executing company for the construction of the liquid bulk berth project at Port of Duqm, celebrated the successful completion of the new stage of the flow of seawater to the pier for the export of petroleum products.
The liquid bulk berth project is now witnessing the most important marine engineering operations that will help to qualify for the final stages of the project.
The ceremony was attended by a number of officials from Special Economic Zone Authority in Duqm (Sezad), Duqm Development Company, Duqm Refinery, Port of Duqm, representatives of the executing companies of the project, consulting companies, subcontractors and a team of engineers.
The agreement also provides for the construction of the quay wall of 1km and installation of buoys and navigational aids devices.
The length of the quay wall is 1km and is equipped with buoys and navigational aids. It also has dual berths marina for docking of giant tankers for the export of petroleum and petrochemical products, and each berth can dock two vessels.
While the rest of the construction work is being completed in the remaining of the liquid bulk berth project currently work is being done for drilling in the sea.
About 26 million cubic metres of material is required to be drilled in order to deepen the port leading to the liquid bulk berth. About 5 million cubic metres of these materials will be used to reclaim and fill the site dedicated to the pier. The company has also reclaimed 2.4km of the 4.6km of secondary wave breaker.
"The project is an important addition to the history of the company, and the (liquid bulk berth) works is being done according to the approved plan where the completion rate exceeds 85 per cent of the basic works," said Bart Brupper, project manager at Boskalis Westminster Oman Limited.
After completion of the project, oil reservoirs and storages for oil and derivatives products of Duqm Refinery Company and its associated facilities will be built on the pavement to export refined products.