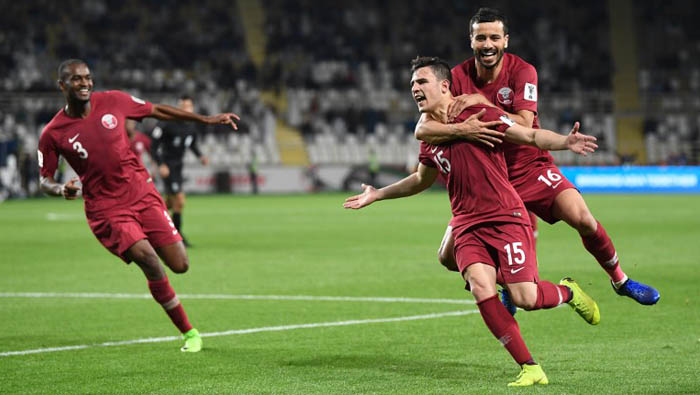 ABU DHABI: Qatar beat Iraq 1-0 in a full-blooded contest to reach the Asian Cup quarter-finals on Tuesday as title-chasing South Korea dodged a bullet to secure their progress.
The Koreans were taken to extra time by tiny Bahrain where a thumping header from substitute Kim Jin-su dragged the tournament co-favourites through to face the 2022 World Cup hosts in the last eight.
But Bassam Alrawi silenced the haters on 62 minutes when he curled in a free-kick to take the Qataris into the last eight for a third time.
It was Qatar's fourth win in four games this tournament after topping their group and the least they deserved from a politically charged clash brimming with passion, if low on genuine quality.
Iraq, shock Asian Cup winners in 2007 and semi-finalists four years ago, carried very little attacking threat until Atalanta's Ali Adnan fizzed a free-kick just wide 12 minutes from time.
Seemingly more interested in snarling at the referee every time a decision went against them, Iraq ultimately paid for their lack of ambition.
At the final whistle, their players slumped to the turf, several sobbing uncontrollably as jeers rang out from the crowd.
Qatar enjoyed the best of the early skirmishes, Abdelkarim Hassan volleying against the bar before Hatim Abdelaziz missed a sitter on the stroke of half-time.
Sudan-born forward Almoez Ali, who needs one more goal to equal Ali Daei's record of eight in a single Asian Cup, had a quiet night, but kept his powder dry for Friday's quarter-final.
South Korea's quest to end 59 years of Asian Cup hurt looked to be safely on track when Hwang Hee-chan pounced on a loose ball two minutes before half-time in Dubai.
But Mohamed Al Romaihi equalised with a poacher's strike 13 minutes from time to send a shiver through a Korean side who are under intense pressure to improve on their runner-up finish in 2015.
Normal service was resumed in extra-time though when right-back Lee Yong's pinpoint cross found Kim steaming in at the back post to score with an unstoppable header.
Korean captain Son Heung-min and Ji Dong-won lifted up Ki Sung-yueng's shirt in tribute to their team mate, whose Asian Cup was ended by a hamstring injury sustained during the group stage.
"It was a tough game," said Son after the Taeguk Warriors reached the quarter-finals for the seventh straight time.
"It's all about attitude as well, and I'm a bit unhappy with our performance -- I think we're better than that."