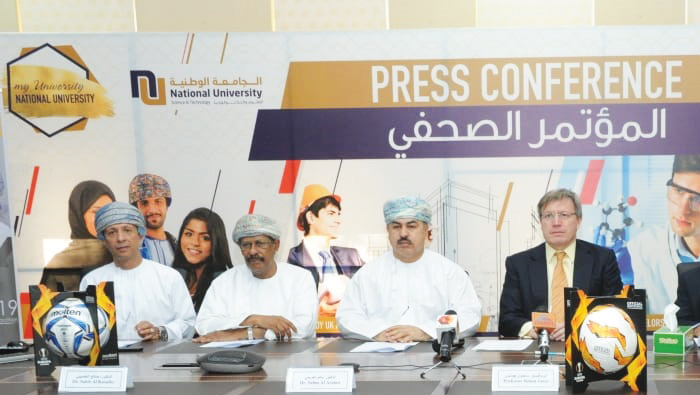 Muscat: The National University of Science and Technology yesterday revealed the sports identity of its sports teams at a press conference held at the conference hall, College of Pharmacy, Bausher. The conference was attended by and in the presence of many dignitaries, sport figures and the media.
The press meet was attended by Prof. Simon Richard Jones, Vice-Chancellor of the University; Dr. Salim bin Khamis Al Araimi, Deputy Vice-Chancellor and Provost (Academic & Research); A. Nizamuddin Ahmed, Assistant Vice-Chancellor (Planning); Dr. Saleh Al Khusaibi, Dean of the College of Medicine; Dr. Yasin Al Lawatia, Dean of the College of Pharmacy; and Dr. Ahmed bin Hassan Al Balushi, Dean of the College of Engineering.
The National University announced its new sports teams across several games, including football, aside football (futsal), basketball, handball and volleyball, table tennis, bowling and taekwondo.
The National University held this conference, which is the first of its kind, where it indicated its intention to expand its sports activities by forming an automobile team in partnership with the Oman Automobile Club, a golf team through its partnership with the Oman Golf Committee, and its trend towards spreading the culture of doping risks to athletes through awareness campaigns in collaboration with the Oman Anti-Doping Committee.
The National University is in the process of organising a number of inter-college competitions across football, futsal, gymnastics, basketball, handball and volleyball, in addition to closely cooperating with the Oman Tennis Table Committee to publicise the game.
The National University announced its contract with Captain Salim Azzan as the University’s Manager for the coaching staff. Azzan is a well-known coach, with an outstanding record of achievements in football practice and training, as well as a lecturer and coach.
The University announced its logistics partner who will provide the sportswear to the University’s sports teams, where a logistics support agreement was signed to sponsor the sports teams (Best Sports Company); the agreement was signed by Deputy Vice-Chancellor and Provost (Academic & Research), for the University, while the other party was represented by Mohamed Abdu, the company’s – Managing Director.
Azzan confirmed that he would work towards forming distinct sports teams for the university in the next stage.
During the press conference, the National University declared the details of the special sports scholarships allocated by the University for Sports in the University’s specialisations across medicine, pharmacy and engineering, which will be offered through the Ministry of Sports Affairs and will be open to sports figures, sports stars, administrative staff, trainers and media professionals. This is part of the university’s educational services support to the sports sector.
The press conference was attended by prominent sports figures and leaders who praised the advanced step of the National University with regard to its interest in sports and its diversity by forming so many sports teams. The conference was attended by Khalid Al Aadi, Chairman of Oman Tennis Association, and Mohamed Al Assami, member of the Oman Athletics Association.
Some of the national university’s partners also took part in the conference, who will play an important role in supporting sport activities in the university through various competitions and programmes. The press met was attended by Mohammed Al Yahmadi, Chairman of the Organising Committee; Al Rawahi, Director of Oman Motor Club; and Rashid Al Kindi, Oman Team Manager for sailing. The conference also attended by Ahmad Al Jahdhi, Vice Chairman of the Oman Golf Committee; Mohamad Al Yahmadi, Chairman of the Organising Committee, Cheer Your Team Programme; Hamza Al Aidaroos, Vice Chairman of the Oman Taekwondo Committee; and Rashid Al Kindi, Manager of Oman Sail Team.
Jones welcomed the participants and stressed the importance of supporting the sports sector academically, logistically and educationally, in order to enhance the development the sports system.
Al Araimi stressed the important role of sports in building educational and advanced societies, which has a major role to play in supporting the Sultanate’s Vision 2040. He pointed out his extensive interest in giving more space to sports within the university.