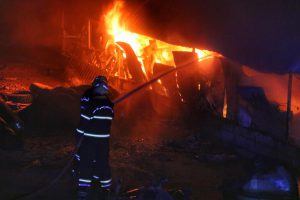 Muscat: A number of storage spaces in the Wilayat of Barka caught fire, the Public Authority for Civil Defence and Ambulance (PACDA) has announced.

When authorities at South Batinah’s PACDA received a call regarding the fire, rescue teams were immediately dispatched to the scene. However, on reaching the site officials found that the fire was huge and they required additional assistance.
**media[994299]**
PACDA explained, "When the team reached the site it became clear that the fire had broken out in several adjacent stores containing medical and agricultural tools. Due to the size of the fire, additional assistance from other centres was required.”

The civil defence and ambulance teams in Muscat Governorate immediately responded to the report. Thanks to the joint effort the teams managed to contain the fire and prevent it from spreading to the other areas.
**media[994300]**
"The fire resulted in material losses without any casualties," PACDA said. However, the cause of the fire wasn’t made available.

The authority has called on the owners of warehouses and facilities to abide by the safety requirements issued by them and has asked them to organise storage areas in order to protect lives and property.