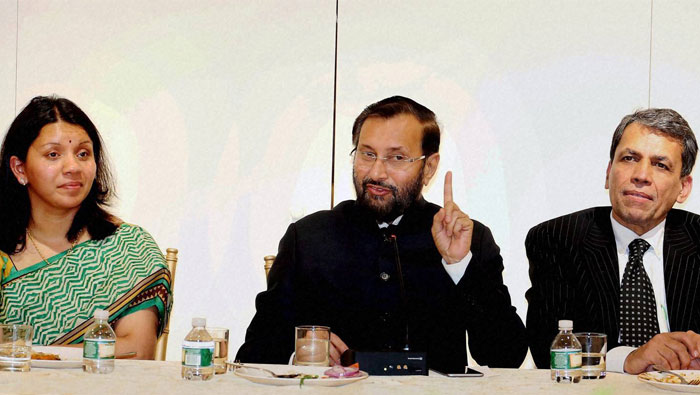 New York: India has said that developed nations should encourage renewable energy programmes and not "put a spoke into it" as it termed "unfortunate" a recent WTO ruling against its power purchase agreements with solar firms.
Country's Environment Minister Prakash Javadekar said he will use the occasion to raise the "unfortunate" case of the US going to the WTO on the issue.
"I will definitely raise (this issue) in my speech. This is unfortunate, not the ruling, even America going to WTO, that is unfortunate," he told PTI.
Javadekar added that India has launched the world's largest renewable programme and reserved a "very small" part of it for Indian manufacturers.
Yet, if that is being "challenged without seeing the things in proper context and perspective" and on technical grounds, it is discouraging for the developing nations, he said.
Such an action "discourages. This is not multilateralism. We must encourage" nations undertaking clean energy programmes. "India generating 175 GW of renewable energy is the biggest programme. One should not put a spoke into it. You are lecturing one thing and practicing the exact opposite," he said.
He said while it is up to the Commerce Ministry to take a call on how to proceed with the matter, "such things should not happen."
Ruling against India, WTO had recently said the government's power purchase agreements with solar firms were "inconsistent" with international norms -- a matter in which the US had filed a complaint before the global trade body alleging discrimination against American firms.
The US had dragged India to WTO on this issue in 2014, alleging the clause relating to Domestic Content Requirement (DCR) in the country's solar power mission were discriminatory in nature and "nullified" the benefits accruing to American solar power developers.
Javadekar will join heads of state, foreign ministers and other representatives from more than 165 countries who will sign the historic climate change agreement reached in Paris last December at the signature ceremony hosted by UN Secretary-General Ban Ki-moon.
The large number of countries will set a record for the most countries to sign an international agreement on one day, previously set in 1982, when 119 countries signed the Law of the Sea Convention.
Javadekar expressed hope that "collective wisdom" will ultimately prevail and both developed and developing nations will do their part to address the issue of climate change.
"India has come to New York for signing the Paris agreement with full confidence that ultimately the collective wisdom will prevail and all countries - developed and developing - will do their bit," Javadekar said.
Noting that the issue of climate fund continues to remain a concern, he said developed countries have to mobilise $100 billion "sooner than later" and they must also take enhanced targets for 2016-2020, which is the second commitment period of the Kyoto Protocol.
"Their actions should be declared immediately. That will give more confidence to the developing world that the developed world is also walking the talk," he said.
Javadekar underscored that India is "leading by example" as he highlighted that the country has put a $6 cess per tonne on coal, besides already taking another 26 initiatives post the Paris pact to address climate change.
"The cess is the highest tax put on coal. It is a solid action taken against carbon emission," he said, adding that nations have applauded India's decision of taxing its coal.
"India has showcased its leadership and if developed world follows this example" and puts a similar cess on their coal production, "they will easily mobilise" the $100 billion required by 2020 for the climate fund, he said.
"We have led by example, taxed our coal. The developed nations should also do that. They have to show their commitment otherwise whole Paris agreement will fall apart," he said.
He said every climate action has a "cost" and developed nations are asking the developing world to pay that cost.
"The developed world has caused the climate change of today because of their 100 years of relentless carbon emissions. We are much cleaner at our development stages as compared to those of the developed world," he said, adding the developed world "behaved irresponsibly" and the developing nations are suffering.
Outlining the measures taken by the government to cut carbon emissions, Javadekar said India has incentivized and given subsidy to electrical and hybrid vehicles and enacted an ‘e-rickshaw bill’.
The government has also taxed petroleum and diesel vehicles, aiming to "disincentivize" polluting vehicles.
Almost 40 per cent of India’s energy mix by 2030 will be from non-fossil fuel.
"America will not achieve such a mix through their INDCs. So developed nations must take up more targets," he said.