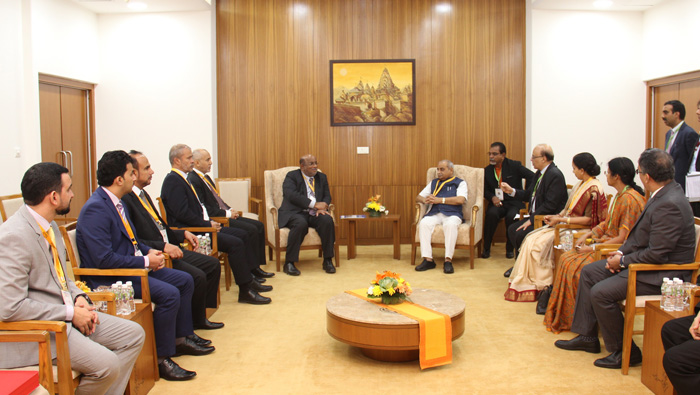 Muscat: Oman is offering Indian companies various opportunities in various economic sectors at Duqm, a top government official has said.
Speaking at the Vibrant Gujarat conference, which concluded on Sunday in Ahmedabad, Yahya bin Said Al Jabri, Chairman of the Board of Directors of the Public Authority for Investment Promotion and Export Development (Ithraa) said, “The conference provided a good opportunity for Indian companies to explore investment opportunities in the Sultanate. I hope that the coming period will witness economic partnerships between the two sides.”
He added that participation in the Vibrant Gujarat conference and exhibition opened many possibilities for strengthening economic partnerships between the two countries, stressing that the Omani investment product has the ability to compete internationally, and inviting the participants to visit the Sultanate pavilion at the exhibition.
At the end of his speech, he expressed his appreciation to the organisers of the Vibrant Gujarat conference for their invitation to the Sultanate to participate in this global event.
The closing ceremony was held under the patronage of Vice President of India M Venkaiah Naidu, who affirmed the role played by the Vibrant Gujarat conference in economic revitalisation, pointing to a number of economic indicators that confirm the growth of the Indian economy.
Bilateral meetings
On January 20, 2018, the Deputy Chief Minister of the State of Gujarat received Yahya bin Saeed Al Jabri and his accompanying delegation. During the meeting, they stressed the importance of the economic relations between the Sultanate and India and the efforts of the two countries to develop them to serve the common objectives.
In the same context, Al Jabri discussed the activation of the memorandum of understanding signed by Oman Development Company for the Economic Zone for Development in 2017 with Adani Group.
During his visit to the Mundra Port on the Indian coast of Gujarat state, Adani is the largest ports company in India which operates the largest port of Mundra Port. The company operates in a number of infrastructure and industrial sectors with an investment of about $ 12 billion.