Coffee clash brewing in China as Luckin takes on Starbucks 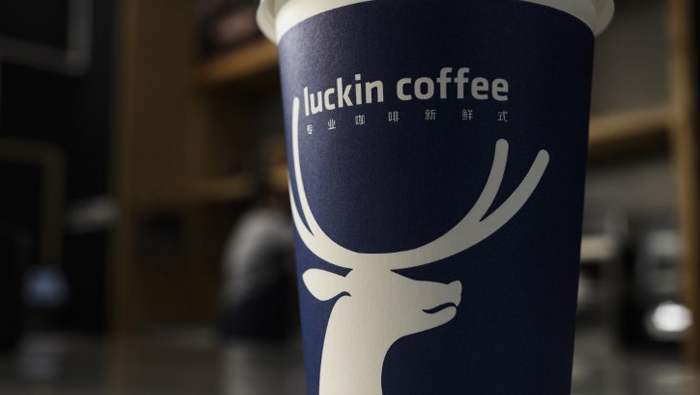 Beijing: When Starbucks came to China two decades ago it promised to open a new store every 15 hours. Now a homegrown rival, Luckin Coffee, plans to build a high tech-driven shop every three and a half hours to dethrone the US giant.
The Chinese upstart is burning through millions of dollars to lure customers with steep discounts, challenging Starbucks' dominance by targeting office workers and students who prefer to have their java on-the-go or delivered to their doorstep.
While Starbucks and British rival Costa Coffee offer lounging spaces for people to work or meet friends, most Luckin outlets are more like "delivery kitchens".
The shops are no bigger than a studio apartment, with no tables, display counters or even cash registers because all payments are made using mobile phones.
Luckin's no-frills approach means consumers pay about a third less for a cup compared to other global brands. A tall-sized latte costs 31 yuan (around $5) at Starbucks, but only 24 yuan at Luckin.
Customers who walk into one of Luckin's blue-and-white outlets need only spend a few minutes there — to scan a code and pay for their coffee that has been pre-ordered through the company's smartphone app.
"I like the convenience, there are no long queues, or having to sit alone while your coffee is brewed," said Yu Qian, a financial analyst in Beijing. "The coffee itself is a little sweeter, more like the sweet milk tea that is popular in China".
Luckin's aggressive strategy mirrors tactics used by other Chinese start-ups that have dislodged Western brands from one of the world's top consumer markets.
"The big advantage for us of having pickup stores versus the big stores is that in terms of rental costs, we pay significantly less than our competitors," Luckin's chief strategy officer, Reinout Schakel, told AFP.
After only a year in business, the company announced plans earlier this month to open 2,500 outlets by the end of the year, which would push its total store strength to 4,500. By comparison, Starbucks has some 3,600 stores across the country.
Playing catch-up
The US behemoth has an 80 per cent stake in China's $3.4 billion coffee shop market, according to research group Euromonitor.
But Schakel sees room for growth.
Chinese consumers currently drink just four to five cups of coffee per year, compared to about 300 cups in neighbouring Japan or South Korea, which were also traditionally tea drinking markets, he said.
China is Starbucks' fastest-growing and second biggest market after the United States.
Its Reserve Roastery in Shanghai, which opened in late 2017, is the company's biggest store in the world.
But it was a latecomer to China's huge food delivery industry.
The Seattle-based company partnered with Chinese e-commerce firm Alibaba's delivery service ele.me only after Luckin started eating into its market share in July.
"Our delivery service today covers more than 2,000 stores across 30 cities, within three months of its launch," Derek Ng, communications director for Starbucks China, told AFP.
Competition has also prompted Starbucks to focus on its more upmarket Reserve brand of rarer coffees from around the world, said Hu Yuwan, an analyst at Daxue Consulting in Shanghai.
But the US chain has recently started doing discounts, Hu said, adding the coffee rivalry reminded her of the discount wars between Uber and its local rival Didi Chuxing, which later dislodged the American ride-hailing giant from the Chinese market.
Schakel — who is also Luckin's chief financial officer — says the start-up can afford to burn money to grab market share over the next few years.
"Are we competing with Starbucks? Probably to some extent. We don't care whether the demand is coming from new coffee drinkers or from Starbucks coffee drinkers," he said.
China's first coffee unicorn
Luckin's caffeine-fuelled expansion has been funded by investors including Centurium Capital, a private equity fund founded by the former China head of Warburg Pincus, and GIC, Singapore's sovereign wealth fund.
The company raised about $400 million in two rounds of funding last year and says it has been valued at $2.2 billion, making it the first coffee unicorn to come out of China.
Schakel declined to comment on rumours that Luckin was seeking a listing on the Hong Kong stock exchange.
But China's landscape is littered with start-ups that have gone belly-up after bleeding money on discounts and aggressive advertising.
"Am I worried whether we are going to go down that path? Absolutely not," Schakel said.
"Even if we sell our products at a discount at the right scale (it can) be profitable".