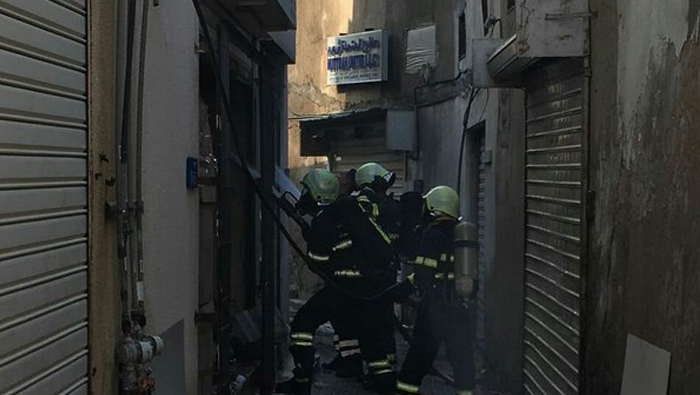 Muscat: Eight people have been admitted to hospital with breathing problems, including one with fractures on leg, following a fire break in their building near Muttrah Souq.
“Eight are in hospital. One got injured when he jumped through the window to escape the fire,” Rafeeek Kandathil, a resident in the fire engulfed building, told Times of Oman.
Public authority for civil defense and ambulances (PACDA) personnel had to use ladders and cranes to evacuate the people from the building.
Posting pictures of the rescue operation, PACDA tweeted that injured were rushed hospital in ambulances.
“It seems the fire broke out in the store room of the building’s ground floor where bags and perfumes were stored,” Rafeek added.
“We noticed the fire and smoke only when we woke up for prayer early in the morning. However, timely action of firemen had averted a major tragedy,” Rafeek said while adding that they can tell about loss only after reaching the apartment.
“We are outside in friends rooms. After reaching our room only we can say about the loss,” Rafeek added.
In February, Mazrook Keethadath, a shop manager in Muttrah, lost goods worth OMR200,000 in his warehouse blaze in the same area.
Oman records a fire case every three hours, according to a 2015 report by the National Centre for Statistics and Information.