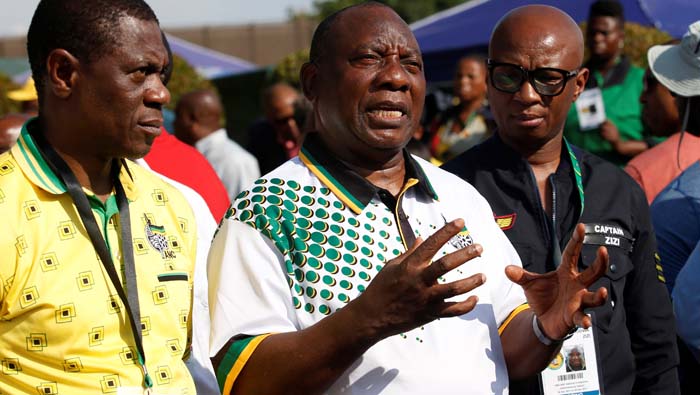 Durban: South African President Cyril Ramaphosa on Saturday launched the ANC’s campaign for legislative elections in May, acknowledging the party’s past mistakes and promising to restore democratic institutions and economic growth.
Ramaphosa unveiled a 68-page manifesto before tens of thousands of supporters in the eastern city of Durban, marking the start of four months of hectic campaigning.
The African National Congress (ANC), which has ruled since the end of apartheid 25 years ago, is tipped to win the election in May despite faltering support, internal divisions and a sluggish economy.
The party of Nelson Mandela suffered a slump in popularity under the scandal-ridden presidency of Jacob Zuma, who was ousted last February after nine years at the helm.
But a recent IPSOS survey predicted the ANC could garner as much as 61 per cent in the national and provincial elections.
Forecast
At the legislative level, that would put it on a par with its performance in 2014, when it picked up 62 per cent.
In South Africa’s parliament, the party which holds a majority of seats also selects the president.
The forecast upswing is pinned on the appointment of moderate pro-business reformer Ramaphosa as president after ANC lawmakers forced Zuma to resign as corruption scandals piled up.
Ramaphosa admitted the party has in recent times “fallen short” of expectations. “We must acknowledge that mistakes have been made and that in some areas transformation has stalled,” he said.
“After a period of doubt and uncertainty, we have arrived at a moment of hope and renewal.
Opportunity
“The 2019 elections provide an opportunity to restore our democratic institutions and to return our country to a path of transformation, growth and development.”
He said at the centre of the party manifesto is a plan to create jobs and ensure decent wages.
He vowed to “intensify” the war against corruption.
Tens of thousands of party activists dressed mostly in yellow and green party colours converged at the 85,000-capacity soccer stadium in the coastal city of Durban for the campaign launch where they danced to music.
The stadium erupted into wild applause when ex-leader Zuma joined a group of dancers on stage.
In a noisy and colourful display, dozens of motorbike riders flying ANC flags, circled the pitch - revving up their bikes to chants and applause. In a bruising internal party battle, Ramaphosa won a power struggle to succeed Zuma, whose favoured candidate was Zuma’s former wife.
Senior party officials have this week fanned out across Kwa-Zulu Natal province - which has in recent years experienced a spate of killings of ANC officials - spreading the message of a revived and unified party.
Ramaphosa vowed work “more diligently” to get rid of factionalism and patronage, as he switched between the country’s 11 languages, throughout his speech. Launching its election manifesto in heavily-populated KwaZulu-Natal — Zuma’s home province and former stronghold — is a strategic choice after last year’s divisions.
Ramaphosa has publicly tried to mend ties, sitting next to Zuma and praising him at party events.
In policy terms, the manifesto is set to underline the ANC’s commitment to land reform to tackle racial inequality — setting the stage for one of the election’s fiercest battlegrounds.
One of Ramaphosa’s flagship pledges is to change the constitution to allow land to be taken from minority white owners without compensation — a plan aimed at attracting landless black voters but that has alarmed many foreign investors.
Manifesto
“In this manifesto, we outline....a plan to accelerate land reform..., including, where appropriate, expropriation without compensation,” said Ramaphosa.
The South African economy is forecast to have grown just 0.7 percent last year, with unemployment remaining at record highs of over 27 per cent.
The ANC will face the main opposition Democratic Alliance and the radical leftist Economic Freedom Fighters party in the election.
Both parties hope to make gains due to the ANC’s poor recent record and discontent over stark post-apartheid inequality.
But they have struggled to dent the ruling party since Zuma’s fall.
Ramaphosa is eyeing “a decisive victory” in the elections.
Unemployed mother of six, Marriam Xobololo, 53, from the rural area of eNgcobo in the Eastern Cape province has voted for the ANC since 1994.
“When you join the ANC, it’s like when you accept Christ in your heart. The ANC is just like Christ in my heart,” she said. “I will forever vote for ANC, and I will die and perish voting for the ANC.” - AFP