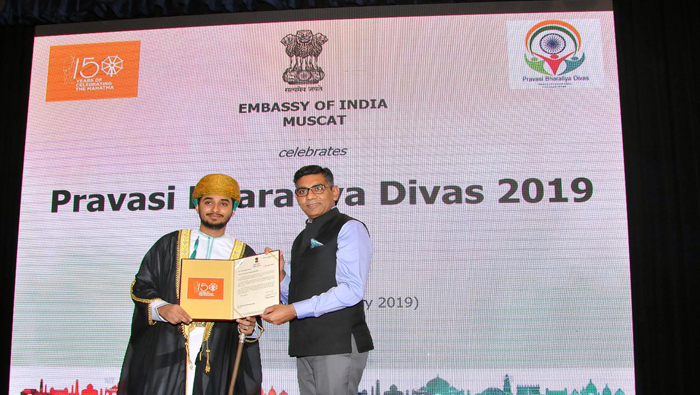 Muscat: Omani singer Haitham Rafi received a letter on behalf of Sushma Swaraj, in appreciation of his tribute to Mahatma Gandhi by singing his favourite song on the occasion of Pravasi Bhartiya Divas.
Rafi was given the award by Munu Mahawar, the ambassador of India to the Sultanate of Oman, on January 9, when the embassy marked Pravasi Bharatiya Divas, a celebration that takes place every two years to honour the Indian diaspora that works and lives overseas.
“The ambassador handed over to Omani singer Haitham Rafi a letter from Sushma Swaraj in appreciation of his tribute to Mahatma Gandhi by singing Gandhiji’s favourite bhajan, vaishnav jan to,” said a statement from the Indian Embassy in Oman.
“PM Narendra Modi invites Indian expatriates to attend the Pravasi Bharatiya Divas function to be held in Varanasi on 21-23 January 2019. Come join us as part of this occasion,” added the statement.
In an open letter to all Indian expatriates and overseas citizens of India, Prime Minister Narendra Modi invited those of Indian origin to come and celebrate Pravasi Bharatiya Divas with the rest of the country.
“Congratulations to you and your family on the occasion of the New Year of 2019,” he said in the letter. “I hope that this New Year makes your dreams come true and enables you to reach new heights of success in your work. Wherever you live, I hope that you remain healthy and safe. That is my wish for you.”
“I am writing this letter to you to request your presence at Pravasi Bhartiya Divas,” added Modi. “This year, Pravasi Bharatiya Divas will be held from 21 to 23 January in Varanasi. As Prime Minister, I will definitely be present at this meeting in Varanasi, and am happy to be there, because I will get to see all of you come there as my personal guests.”
Those who wish to attend Pravasi Bharatiya Divas can register online, at www.pbdindia.gov.in, where they can also take part in the country’s Republic Day celebrations on January 26, and enjoy the Kumbh Mela, which will be organised on the 24th.
“This edition of the Pravasi Bharatiya Divas will be known for two more important things,” said Modi. “This time, when you come to India, you will be able to take part in the Kumbh Mela in Prayagraj. In addition, the 26th of January is our Republic Day and we will celebrate that with you as well,” he said.
All put together, this year’s Pravasi Bharatiya Divas is really unique, and is different from the rest of the celebrations that we have had.”
“This time, you can feel India’s traditions around you in the form of a new perspective, and you will receive inspiration in seeing the new India,” he added. “I also request that you come here along with your close friends and family members, especially those who have not received such an opportunity before.”