Pompeo in reassurance mission to Iraq over US Syria pullout plans 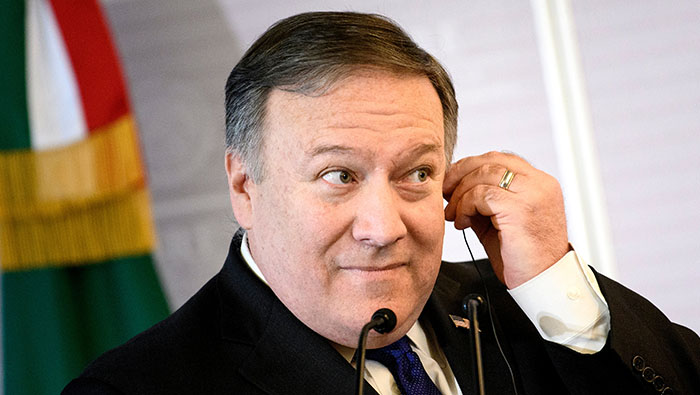 Cairo: US Secretary of State Mike Pompeo said on Wednesday Turkey had committed to protecting Washington's Kurdish allies fighting militants, during a surprise visit to Iraq to soothe concerns over the US troop withdrawal from Syria.
The remarks by US President Donald Trump's top diplomat, on a whistle-stop tour of the Middle East, follow tensions between Washington and Ankara over the Kurds' fate.
Pompeo, speaking in the Iraqi Kurdish regional capital Arbil, said Turkish President Recep Tayyip Erdogan had given assurances over the Syrian Kurds and the US withdrawal plan was intact.
"It's important that we do everything we can to make sure that those folks that fought with us are protected and Erdogan has made commitments, he understands that," Pompeo told reporters.
"He (Erdogan) talked about terrorists being an existential threat, we acknowledged that there is a threat to Turkey from terrorists and we will be very supportive."
Before meeting officials in Iraqi Kurdistan — whose forces have also been key allies in the fight against IS militant group — Pompeo visited Baghdad where he sought to reassure Iraqi officials that Washington remained committed to fighting the IS militant group.
He arrived in Cairo on Wednesday evening. His longest trip since taking office last year is also set to take him to the six member states of the Gulf Cooperation Council, including regional heavyweight Saudi Arabia.
'Significant threats'
Pompeo's unannounced visit to Iraq comes less than two weeks after Trump drew criticism for failing to meet a single Iraqi official during a surprise Christmas trip to US troops at an air base in the west of the country.
Washington's top diplomat is in the Middle East to urge allies to continue to confront the "significant threats" posed by militants despite Trump's shock decision last month to pull all US troops from Syria.
In Baghdad, Pompeo met several senior officials including Prime Minister Adel Abdel Mahdi and President Barham Saleh.
He underlined "US support for the new Iraqi government's efforts to deliver stability, security and prosperity to all Iraqis," a US official said.
Pompeo also "discussed the recent territorial defeat of IS in Syria and the continuation of our cooperation with Iraqi Security Forces to ensure IS' lasting defeat throughout the region."
Saleh said that Baghdad wanted Washington to remain engaged.
"We will need the support of the US," he said, expressing "gratitude to the US for support over the years".
"IS is defeated militarily, but (the) mission is not accomplished," Saleh added.
Rowing back
Trump used his lightning December 26 visit to Iraq — his first to US troops in a conflict zone since being elected — to defend his Syria withdrawal plans and declare an end to America's role as the global "policeman".
He caused a political storm when he announced the troop pullout, claiming IS had been defeated despite continued deadly fighting between US-backed forces and the militants in eastern Syria.
Trump has since rowed back, vowing the withdrawal will be done in a "prudent" way.
Members of his administration have gone further, saying that the timeline of any pullout remains dependent on events on the ground.
There are many in Iraq, particularly pro-Iran factions, who would like an accelerated timetable for a US withdrawal from Iraq too.
But Trump has stressed that he expects US troops to remain in Iraq, from where they can carry out operations in neighbouring Syria if necessary.
Iraq declared victory over IS in December 2017, but the militants retain a network of sleeper cells in major cities and continue to conduct hit-and-run attacks from mountain or desert hideouts.
On Tuesday, a car bomb killed two people in the city of Tikrit, north of the capital, police said.
The Trump administration's insistence on treating Tehran as a threat as big or even bigger than IS also poses major difficulties for Iraq.
Since the 2003 US-led invasion, Tehran has become a political force in Iraq with influence rivalling that of Washington.
Iran too provided support for Iraq's fightback against the militants after they advanced to within striking distance of the capital in 2014.
And Iraq has developed a dependency on imports from its eastern neighbour that is difficult to break.
Washington has granted Baghdad waivers from the crippling unilateral sanctions it reimposed on Tehran last year after Trump pulled out of the landmark 2015 nuclear deal agreed by his predecessor Barack Obama.
Pompeo and the Iraqi prime minister discussed on Wednesday "US support for Iraq's energy independence," the US official said.