Omani girl wins President’s Volunteer Service award in the US 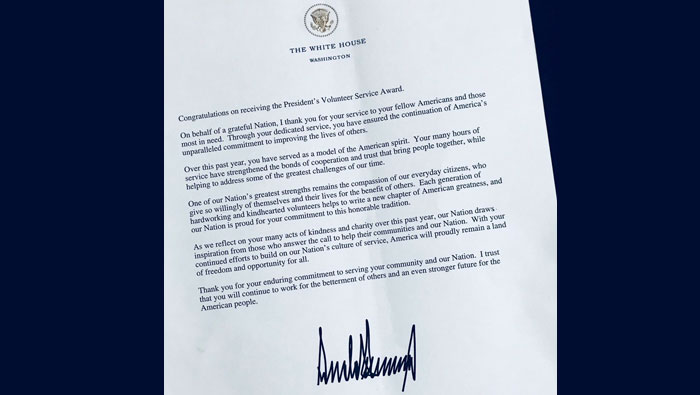 Muscat: A young Omani studying in the American state of Indiana, Noor Al Risi, was awarded the Presidential Volunteer Service Award (PVSA).
Al Risi was awarded the bronze (PVSA) by the Corporation of National and Community Service in recognition and appreciation for her commitment towards strengthening the United States and communities through volunteer service.
Her mother, Samira Al Hosni, announced on Twitter, “After outstanding efforts in volunteer work, my princess Noor Mohammed Ahmed Al Risi has received the US President’s award for volunteer work and received a personal thank you from the White House, specifically from President Donald Trump, for her efforts in serving the community and improving the lives of others.”
Letter of appreciation
Al Risi was given a medal and a letter of appreciation from President Trump. Al Hosni told the Times of Oman that it has been “a long journey that started four years ago when she was 12 years old”, adding, “Noor is 15 years old and is in 10th grade. She exerted a lot of her time for voluntary work and actually contributed to different programmes and projects.”
The PVSA was established in 2003 by the President’s Council on Service and Civic Participation to recognise the importance of volunteers to America’s strength and national identity.
The awards also honour the commitment and investment of volunteers whose services impact every part of the nation and inspire others to do their part.
Since its inception, the PVSA has continued under each administration.
Led by the Corporation for National and Community Service and managed in partnership with Points of Light, the world’s leading organisation dedicated to volunteer service, this programme allows certifying organisations to recognise their most exceptional volunteers.
**media[989881]**
**media[989883]**