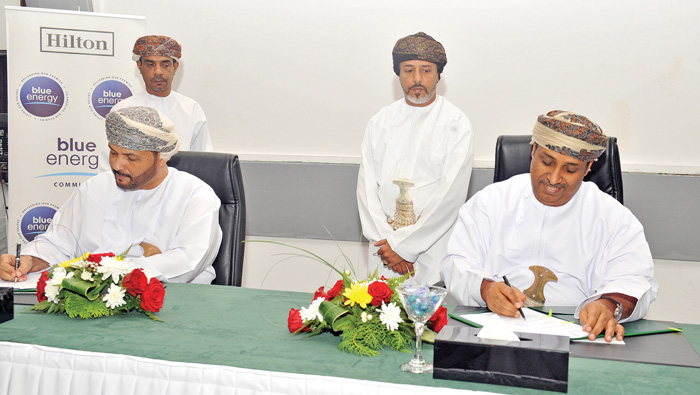 Salalah: Al Murooj Dairy Company signed at Hilton Salalah yesterday agreements of the major suppliers for the milk collection and cooling project in the Governorate of Dhofar in the presence of Sayyid Mohammed bin Sultan Al Busaidi, Minister of State, Governor of Dhofar.
The agreements were signed by Sheikh Musallam bin Said Qatan, Chairman of the Board of Directors of Al Murooj Dairy Company, ith IDMC Limited of the Dairy Development Board of India.
The agreement provides for the supply of technology and laboratory instruments for testing quality of milk before it is received from the cattle breeders.
The agreement signed with Al Manarah Engineering Consultancy Company, which provides for the engineering design, qualification and supervision of contractors executing the engineering work.
The agreement signed with Dhofar Cattle Feed Company, which provides for the sale of fresh milk, collected from the breeders, to the company, which in turn will market it as a final product to the markets.
“This project is one of the food security projects of the Sultanate, which was launched within the framework of the efforts of the Ministry of Agriculture and Fisheries through the Oman Food Investment Holding Company to take the traditional production processes to the best international practices in this regard,” said Dr. Nasser bin Ali Bait Said, CEO of Al Murooj Company.
He added that it is expected that the milk collection and cooling centres will start operating in the second half of 2019. He pointed out that the opening of the centres will continue in succession and gradually until the completion of the first phase by the end of 2020 and the company will begin expansion in other wilayats in 2021.
Al Murooj Dairy Company was established as a closed joint stock company for the implementation and operation of the project.
Oman Food Investment Holding Company (OFIHC) and Oman National Livestock Development Company contribute 60 per cent and 30 per cent each. Dhofar Cattle Feed Company contributes 20 per cent of the capital and the Arab Authority for Agricultural Investment and Development (AAAID) by 20 per cent.
The project will purchase milk from livestock breeders in the Governorate of Dhofar, cool and process it to the required dairy products in the market. The aggregate capacity of the project is estimated at 19,027 liters per day of cow milk and 7,827 liters/day of camel milk.