'I shot myself in the head and survived' 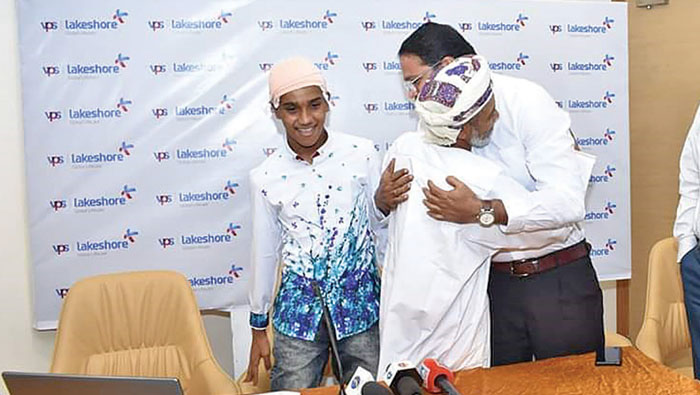 Muscat: A teenager who accidentally shot himself in the head has warned others to stay away from firearms.
“Even though I was used to handling the rifle, this accident happened. I urge everyone to be careful when using any firearm,” 17-year-old Abdulqadir Al Alawi told Times of Oman.
On November 20, 2018, Abdulqadir’s legally owned rifle misfired after he tripped while trying to scare away a cat in his family compound.
Four bullet fragments ricocheted and lodged in his head. Miraculously, he did not lose consciousness and managed to run for help.
“When I shot myself I didn’t faint, my first reaction was to run outside into my cousin’s car and I told him to take me to the hospital. I didn’t feel pain at first but when I reached the hospital I started getting scared,” said Abdulqadir
The biggest bullet fragment hit his left thumb before piercing his tongue and nose, eventually lodging in his brain. Three smaller fragments were distributed between the lower jaw, the upper jaw and the bone over the eyebrow.
The bullet inside his chin was partly removed at a Government Hospital in Oman.
“There was a possibility of complications or swelling so they decided to take me abroad to be treated urgently,” Abdulqadir added. Over a month later Abdulqadir flew to Kochi, India to undergo a rare operation which took eight hours, at VPS Lakeshore Hospital, to remove the bullet fragments.
His father, Mohammed Al Alawi, told Times of Oman: “On the day of the incident, no one was at home and Abdulqadir decided to kill the cat that was attacking the birds in our birdhouse.
“He wanted to kill the cat in one shot but the cat did not die, and so Abdulqadir decided to chase the cat so it would not suffer from the wound and during that chase, he stumbled, the weapon fell and fired.”
The father of 12 had to raise money to pay for his son’s surgery which cost OMR 6,700 to fund. “ We received donations from our family members and even the neighbourhood schoolteachers. We also had to sell some of our assets to raise the money,” he added.
Abdulqadir returned home on January 4, 2019 after spending 12 days in the hospital.
“It was a difficult operation, but thanks to God and the doctors it went well and my son is now home and he can talk, and eat and do everything as usual,” said his father, Mohammed.
“A small part of the bullet still remains in Abdulqadir’s head, above his eyebrow bone, but doctors have reassured us that the piece will not have any long-term side effect on our son. I hope it will not affect his sight,” added Al Alawi.
“ I want to thank all the medical staff at Lakeshore hospital for taking care of me. From the moment we arrived at the hospital they even provided us with a translator throughout my time in India,” Abdulqadir said.
Al Alawi’s mother was overjoyed at the support of the community members. “ I thank God that my son is in good health. I would like to thank all the school teachers, family members and residents of the area that donated to help with my son’s treatment,” Fatma Al Alawi said.
Abdulqair is in his last year of school but worries that he has missed too many days due to this accident and the treatment .
“Because of the surgery it is difficult for me to focus for long periods, I am in grade 12 and so I need get a high grade to be accepted into university. So I decided that I will repeat grade 12, next year.”