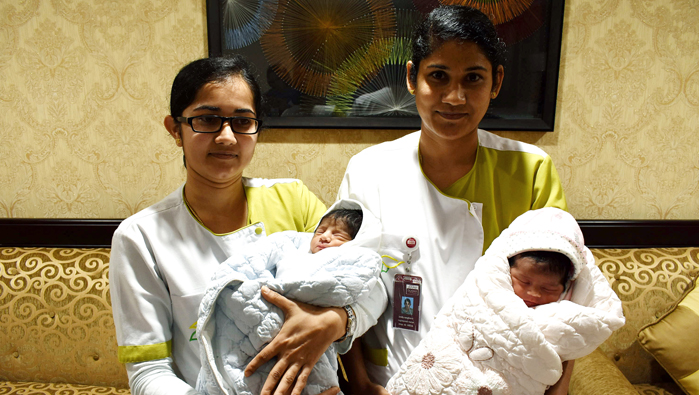 Muscat: An Omani couple received a double dose of joy at the start of the New Year, having welcomed one of the first twins of 2019 into their family.
Fatima Al Maymani gave birth to twins – a boy and a girl – on New Year’s Day, and Dr Nibras Abdullah, the specialist gynaecologist at Burjeel Hospital who oversaw the delivery of the babies, said this was a special moment for the family in more ways than one.
“I am really happy for the family because unfortunately, this couple had been suffering from infertility for a long time and they had been taking treatment for it,” she said, speaking to Times of Oman.
“For them to receive two babies is a blessing and I am really happy for them. When the babies were born, they began crying immediately, so that is a good sign, and when the mother saw them, she also began crying out of joy because the family had been waiting for this moment for a long, long time.”
She added, “When the father saw his children for the first time, he also began crying, because this was a special moment for him, and the patient’s mother, who had been praying for her daughter throughout, also began crying tears of joy, because this was a really happy moment for the family and it showed how much it meant to them.”
The delivery of both babies was completed in just 25 minutes, and the twins were born a minute apart. The baby boy entered the world first, and his little sister followed almost immediately afterwards.
“In Arab culture, there is a belief that you are blessed when you have a boy and a girl,” said Abdullah.
“The joy of the parents when we share the wonderful news of child birth is what keeps us going, and today, when we delivered two bundles of joy, the feeling was of pure bliss. We handed over the babies to the family immediately after birth, and we took a photo of them to remind us of the twins who had been born on the first of January.”
“The joy that a parent gets when he or she sees his/her newborn child for the first time is really special,” she added.
“For this couple in particular, they tried really hard to have children and now they have two, so it is a special moment for them. It is not common for some parents to cry when they see their children for the first time because to have your own child is really special.”
Along with the twins, Burjeel Hospital welcomed three more babies on January 1, 2019, with a total count of five babies on that day. Obaida Kaissiah, Operations Director at Burjeel Hospital, congratulated the parents and said, “I am delighted to share the good fortune of celebrating the New Year with five newborns in our hospital.”